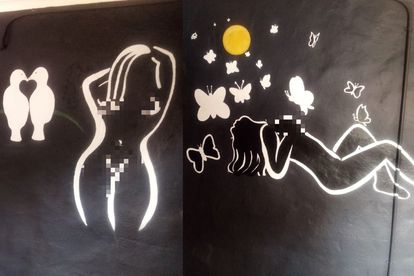 The artist revealed he was asked by Mandla N’s production company – Black Brain – to create artworks for the show.

Mzansi’s latest risqué series The Black Door – which airs on e.tv has invited Rasta (Lebani Sirenje) to produce provocative artworks for the show.

The Zimbabwean-born artist took to his Instagram to announce that he is the creator of the graphics and shared his artwork with his followers on social media:

“Was invited by Black Brain to do some artwork for their new drama series Black Door.”

The artworks were displayed at the show’s premiere on Monday 11 April.

The Black Door, which is dubbed by viewers as Mzansi’s Emmanuelle broadcasts on e.tv weekdays at 21:30.

The channel initially had a 16SN age restriction due to its graphic depictions and scenes involving sex workers, but soon pushed up its classification to 18SNV.

The show which is set in the high-stakes world of a pleasure-dome brothel recently revealed that entertainer Zodwa Wa Bantu would be its first guest star and play herself.

“My scene is about being naked and sexy.”

She also told TshisaLive that she came on board because she appreciated that Black Brain Pictures has gone underground to reveal what is already there.

“There is a world of nakedness and freedom, a beautiful world that no one wants to talk about.”

“These are the stories we should talk about. It is happening, they are there, and people turn a blind eye, but our husbands and boyfriends go there.”

“There is nothing to be ashamed of because they are feeding their families. The sex industry is big, and it lives,” she said.