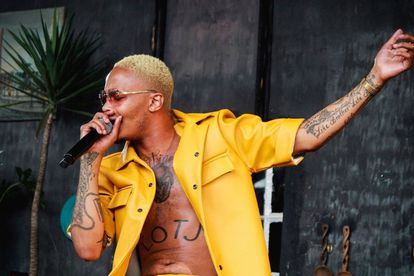 Sithembiso Simelane, popularly known as Zingah, has been in the South African music industry for nearly a decade. The hip-hop star announced his retirement from music on Friday 11 March and left Mzansi with a lot of unanswered questions.

Zingah was part of the hip-hop group, Cashtime Fam before making waves as a solo artist. The group included other rappers, Kid X, AB Crazy, KO, Ma-E, Maggz and Ntukuza. Some of the group’s most popular songs include Goodbye, Shut It Down and Stundee.

In 2014, the group went their separate ways and launched their solo careers. After collaborating with several artists in the industry, Zingah released his debut album, On a Different in 2020. The 10-track album features the likes of Kwesta, Makwa and Moonchild Sanelly.

In 2021, he signed a management deal with Vth Season. The agency represents the likes of Ami Faku, Zādok, and Benny Afroe.

His latest single, Syobabona, was released in October 2021.

Zingah announced his retirement from music on 11 March in an Instagram post. The rapper wrote: “I’m done with the music industry. Whatever I owe, I will figure out how to settle.”

Zingah told TshisaLive that the industry is a “very unhealthy space on so many levels”. He added that there is “so much more to life than we are subjected to”.

“The Riky situation definitely hit hard… Seeing [Riky Rick] do that made me realise that the dream we think we want actually just doesn’t matter. Real life is more important, your mental health is important.”

“I’m not quite sure yet what my next move is going to be. I know I am very interested in getting into the acting space, that has always been a passion of mine… I’m just looking to [live] my life to the fullest potential,” said Zingah.

The star rapper also told the publication that his retirement is a “change of lifestyle”.

“This is just about me closing a chapter, I’m no longer a musician so don’t expect music from me.”

“I enjoyed the ride, there were ups and downs. It’s been a great experience but I don’t think I’m going to give up my entire life to just doing that.”

“I’m about creating a better space for myself now and exercising self-love by action.”

Hawks: Three arrested for possession of platinum worth R750k