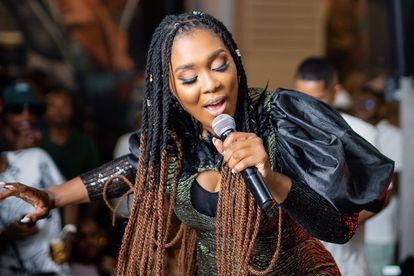 Three years after her last single was released, Lady Zamar is back on the music scene with a hot new amapiano tune! She told Daily Sun the track is not what she would “usually release”. Zamar’s new single comes after she underwent throat surgery in November 2021.

One source close to Lady Zamar told City Press that when her throat issues started, she thought she had flu and dismissed it. The Love Is Blind hitmaker later realised that the problem was much more serious.

“Her voice sounded like a baby when you spoke to her on the phone. It honestly scared me because I did not think she would recover. I thought it would be the end of her music career and that was bad because music is all she knows,” said another source.

Lwazi Zondo, the promotions manager at Universal Music Africa confirmed that the 34-year-old singer was back in the studio.

Speaking to Daily Sun about her new track, Find Me Now, Lady Zamar said the song was born out of “personal truth”.

“All I’ve ever wanted was to find true love and to be swept away by horses and dream chariots. But after having gone through a life-changing experience and being in isolation for so long, I had to find a sense of truth for myself.”

On why she decided to hop onto the amapiano wave, the award-winning songstress said: “As a person who started in the commercial scene with broken beats, it felt fitting to spet into the age of amapiano in my own unique way.”

“This is not what I would normally release but in respect of art and the ever-changing world of music, it’s exciting to try something different and amazing.”

Following her three-year hiatus from the music industry, Lady Zamar is also back on the stage!

TAKE A LOOK AT SOME OF HER PERFORMANCES HERE