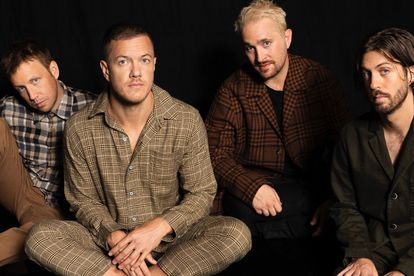 Imagine Dragons are set to perform in Cape Town and Johannesburg on February 2023. Image via Twitter @MusicNewsRumor

Imagine Dragons are set to perform in Cape Town and Johannesburg on February 2023. Image via Twitter @MusicNewsRumor

Canadian sensation Justin Bieber, legendary rock stars Foreigner and Grammy-nominated band The Lumineers are just a few of the international acts who have performances lineup for South Africa later this year and another band has just added Mzansi dates to their calendar.

Grammy award-winning pop-rock band Imagine Dragons, who have been named one of the biggest bands of the decade, are set to perform in South Africa in 2023! The Radioactive hitmakers have planned two shows for Mzansi.

Formed in 2009, Imagine Dragons are one of the biggest bands in the world with hits like Demons, Thunder, It’s Time and On Top Of The World.

Imagine Dragons announced their Mercury World Tour on 31 March with tour dates across the United States. The tour celebrates the release of their sixth studio album, Mercury Vol.2 set to be released on 1 July.

Imagine Dragons’ most recent single release is Bones, which is set to feature on Mercury Vol.2.

The band will be performing in Cape Town on 1 February at the DHL Stadium and in Johannesburg at FNB Stadium on 4 February.

Tickets for both shows will be available from Friday 8 July at 09:00.

Discovery Bank members will be able to get their tickets from Wednesday 9 July at 09:00.

Tickets will be available here.