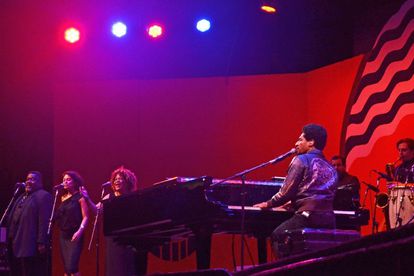 The top names in music will gather on Sunday to honour their own at the Grammys, now in its 64th edition, with pop juggernauts joining jazzman Jon Batiste as the leading nominees.

This year, the gala will take place in Las Vegas for the first time, after organizers postponed the original 31 January event over a surge in COVID-19 cases, and then moved it from Los Angeles to the US gambling capital.

ALSO READ: Music’s biggest night: Everything to know about the Grammys [watch]

A WIDE-OPEN FIELD AT THIS YEAR’S GRAMMYS

The field is wide open – especially after the Recording Academy expanded the top four categories yet again, this time to include 10 nominees, in a bid to improve diversity.

The timing of the Grammys just one week after Will Smith stunned the world by slapping Chris Rock on stage at the Oscars adds an extra layer of unpredictability to what is already usually one of the more bizarre nights on the showbiz awards circuit.

Justin Bieber will vie for eight trophies at the ceremony hosted by late-night host Trevor Noah, as will R&B favourite H.E.R. and singer-rapper Doja Cat.

Grammys darling Billie Eilish is in the running for seven prizes. The same holds true for Olivia Rodrigo, a former Disney Channel actress who exploded onto the pop scene last year with her breakout smash hit drivers license.

The 19-year-old Rodrigo landed expected nods for her much-touted debut album Sour and is a near shoo-in for Best New Artist – she is up against Eilish’s brother Finneas, rapper Saweetie, experimental pop act Japanese Breakfast and others.

Like Eilish in 2020, Rodrigo has the opportunity to sweep the top four categories, which would make her only the third artist to do so.

But it is Jon Batiste – the jazz and R&B artist and bandleader, who won an Oscar last year for his soundtrack to the Pixar animated movie Soul – who has the most chances at Grammys gold, snagging 11 nominations including in two top categories.

The longtime musical director of the popular The Late Show With Stephen Colbert, Batiste in recent years has emerged as a voice of social justice and protest.

The Black artist born into a prominent New Orleans musical dynasty will compete mainly on the strength of his album We Are and its rousing single Freedom.

The sleeper nominations leader is also up for awards in fields spanning genre and medium, including R&B, jazz, American roots and contemporary classical, along with nods for Best Music Video and his composition work on Soul.

Lady Gaga and Tony Bennett, the beloved 95-year-old crooner, have strong chances to add to their Grammys haul – their album Love For Sale earned six nominations.

KANYE WEST VS TAYLOR SWIFT FOR GRAMMYS ALBUM OF THE YEAR

Kanye West scored several nominations for his album Donda – and will face off with longtime nemesis Taylor Swift in the Album of the Year category, where she has her sole chance at Grammy gold for evermore.

Swift did not submit Fearless (Taylor’s Version) – her 2021 re-recording of her 2008 album – for Grammy consideration, after winning four awards for the original in 2010.

The rap categories include West along with Nas, J Cole and Tyler, the Creator – but not Drake, who withdrew his two nominations in December without explanation.

In the past, the Canadian chart-topper had accused the Recording Academy, which he has long sparred with, of pigeonholing his music in the rap categories because he is Black.

Cardi B and Megan Thee Stallion will compete in the Best Rap Performance category, the only field in which the artists behind the smash “WAP” are in the running.

Korean pop juggernauts BTS scored one nomination in the pop categories for the huge commercial hit Butter – less than expected for the massively popular boy band that has struggled to make inroads at the Grammys.

But BTS is slated to perform on the night watched as much for its staging as the actual awards, as will Rodrigo, Eilish, Batiste and H.E.R. along with Lil Nas X.

West, who has five total nominations, had reportedly been removed from the performance lineup over his sometimes troubling behaviour, but some sources said he could still join the lineup at the last minute.

The mercurial West has for weeks been airing personal attacks on comedian Pete Davidson, who is dating West’s ex-wife Kim Kardashian.

The 44-year-old megastar also was barred on Instagram for 24 hours after insulting Grammy host Noah, who had said West was becoming “more and more belligerent in how he tries to get Kim back.”