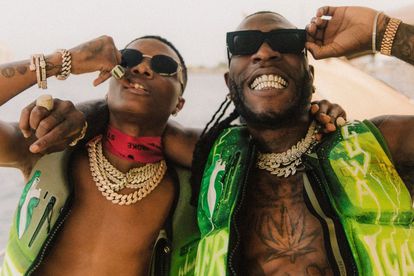 Burna Boy and Wizkid teamed up on a new afrobeats banger titled ‘B. D’OR’. Image via Twitter @AppleMusic

Burna Boy and Wizkid teamed up on a new afrobeats banger titled ‘B. D’OR’. Image via Twitter @AppleMusic

Burna Boy and Wizkid both have one thing in common… They are two of Africa’s biggest artists who have made their mark on a global scale. The two Nigerian artists teamed up on a new track titled B. D’OR inspired by one of the highest honours in football.

AFROBEATS TO THE WORLD

Nigerian sensations Burna Boy and Wizkid have solidified their place as two of Africa’s most successful musicians. Individually they have transported the world to Nigeria through afrobeat.

Both artists won their first Grammy awards at the 63rd annual Grammys earlier this year. Burna Boy won Best Global Album for his album Twice As Tall while Wizkid won for Best Music Video for this feature on Beyoncé’s Brown Skin Girl.

Wizkid featured Burna Boy on his single Ginger from his Made In Lagos album released in 2020. This was the pair’s first-ever collaboration.

The Grammy award-winning artists released their hot new collaboration B. D’OR on Wednesday 15 December. According to OkayAfrica, the track inspired by one of the highest honours in football, the Ballon d’Or award.

Speaking to Apple Music’s Zane Lowe, Burna Boy mentioned that football relates to the track because the Ballon d’Or acts as “the golden ball”.

“Only the best have the golden ball,” he explained.

THE WORLD PRAISES THE NIGERIAN ARTISTS

Taking to Twitter, both their fans praised the pair’s hot new collaboration.