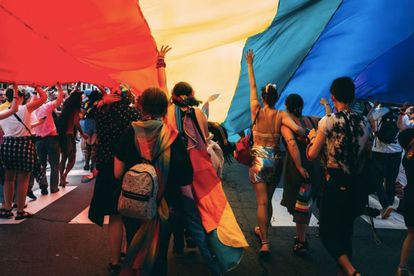 A new survey reveals that 7.1% of US adults identify as LGBT. Image via Unsplash

A new survey reveals that 7.1% of US adults identify as LGBT. Image via Unsplash

The proportion of US adults identifying as LGBT has increased to a high of 7.1%, double the figure from 2012 when Gallup first started measuring it, reflecting a generational shift, the polling firm said on Thursday.

“Young adults are coming of age, including coming to terms with their sexuality or gender identity, at a time when Americans increasingly accept gays, lesbians and transgender people, and LGBT individuals enjoy increasing legal protection,” it said in a statement.

Gallup asks Americans whether they personally identified as straight, lesbian, gay, bisexual, transgender or something other than heterosexual, as part of the demographic information it collects on all its phone surveys.

Respondents can also volunteer any other orientation or gender identity. Among 12 000 people surveyed in the 2021 data, 86.3% said they were straight or heterosexual, while 6.6% did not offer an answer.

The survey began in 2012 when the percentage identifying as LGBT was 3.5%, and it has been steadily rising since.

A breakdown reveals the higher prevalence of LGBT identities among the youngest adults compared with the older generations they are replacing.

Overall, 20.8% or one-in-five Generation Z Americans who have reached adulthood – those born between 1997 and 2003 – identified as LGBT.

THE PERCENTAGE OF GEN Z WHO ARE LGBT DOUBLED SINCE 2017

Since the survey began, the percentage of Traditionalists, Boomers, and Gen X identifying as LGBT had held steady, with a modest uptick seen among millennials.

But the percentage of Gen Z who are LGBT nearly doubled since 2017, when only a small slice of that generation were adults.

“Should that trend within Gen Z continue, the proportion of US adults in that generation who say they are LGBT will grow even higher once all members of the generation reach adulthood,” Gallup said in a statement.

For the first time, the firm recorded how many identified with each LGBT category.

More than half of LGBT Americans, or 57%, said they were bisexual – equivalent to 4% of all US adults.

The next leading LGBT identity was gay, at 21%, lesbian at 14%, 10% transgender, and 4% something else such as queer or same-gender-loving.