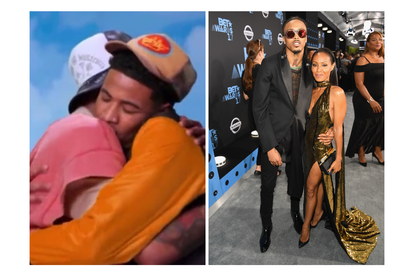 August Alsina appeared to have been coming out as part of the LGBTQIA+ in this week’s episode of VH1’s “The Surreal Life.”

In an unexpected ending to the show, Alsina introduced a man who he says helped him find “a love that feels limitless.”

This comes two years after his affair scandal with Jada Pinkett-Smith made global headlines.

Alsina makes this announcement at the end of the season seven finale on Monday 21 November, shocking and confusing viewers all over the world, audiences were left wondering if the rapper just came out or not.

He said on the show that his honoured that the person he loves, loves him back, he explained that:

“And then, what do you know, love showed up – but in a new way. I wanna share that and really honor the person that I love and that loves me back and teaching me so much about love and healing. I wanna do that in front of the world because it defies all the constructs that one would say love is supposed to be or love should look like.”

ALSO TAKE: Survey shows the majority of the LGBTQIA+ community is single

HipHopDx identified the man in the clip with Alsina as Zu, in in the article they explain that:

“The man’s name is Zu and has collaborated with August Alsina on the songs “Yeah Yeah” and “2am,” which were both released this past summer“

Furthermore, the rapper did not state outright if they were in a relationship.

Some viewers questioned if perhaps he was referring to ‘brotherly’ love.

But Alisa has not confirmed or denied the rumours of the nature of his relationship with Zu.

ALSO READ: Superman’s son has finally come out to his father as bisexual

Corn bread with paprika: A savoury and spicy local loaf

That time Bheki Cele was trolled over ‘daughter’ partying without underwear

SASSA beneficiaries urged to use gold cards at ATMs and retailers