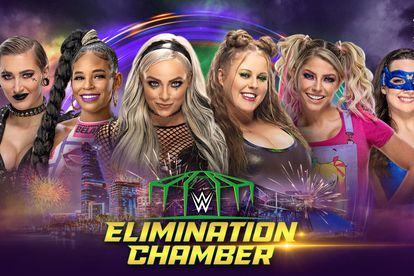 The women of WWE are set to make history as the Elimination Chamber heads to Jeddah, Saudi Arabia.

Not only will Elimination Chamber feature more women’s matches than ever before, but WWE also unveiled the first-ever billboards featuring female Superstars in Saudi Arabia ahead of the Premium Live Event on Saturday 19 February.

Here is a look at what to expect at the 2022 Elimination Chamber:

Lita kicked off the women’s revolution in 2016 and it is fitting that she should return for her first big singles match in years at Elimination Chamber.

In a full-circle moment, the Hall of Famer will now be going head-to-head in a RAW Women’s Champion title match against Becky Lynch who concedes that she will be facing her idol.

Since returning at SummerSlam to reclaim the gold, Big Time Becks has stood on top of the mountain in dominant fashion, withstanding everyone from Bianca Belair to Liv Morgan to Doudrop to SmackDown Women’s Champion Charlotte Flair.

Liv Morgan vs. Rhea Ripley vs. Bianca Belair vs. Doudrop vs. Nikki A.S.H. vs. Alexa Bliss

Six female Superstars will battle inside the career-altering Elimination Chamber for the right to challenge the Raw Women’s Champion at WrestleMania.

Belair, Ripley and Nikki are all former Women’s Champions while Doudrop and Morgan have also recently challenged Lynch for the Raw Women’s Title and have come within an eyelash of unseating the champion.

How much is Dwayne ‘The Rock’ Johnson’s Hollywood mansion worth?

In the most-recent Monday night Raw, Alexa Bliss has now been revealed as the final participants in the Women’s Elimination Chamber match.

Of course, whether the winner will challenge Lynch on The Grandest Stage of Them All is still contingent on whether Big Time Becks can overcome former-four-time Women’s Champion in a one-on-one championship showdown.

Deville, has shown an undeniable disdain for the two-time SmackDown Women’s Champion and has tried everything to make Naomi’s life a living hell. However, Ronda Rousey recently emerged on SmackDown to announce that she would be challenging Flair for the SmackDown Women’s Title at WrestleMania.

Although The Queen defeated Naomi in the recent SmackDown Women’s Title Match, Deville continued to taunt Naomi, which turned into a 2-on-1 attack by The Queen and Deville. This brought The Baddest Woman on the Planet to Naomi’s rescue. Rousey sent Flair packing and nearly overpowered Deville again with another arm lock-up – ultimately making the tag team matchup for WWE Elimination Chamber official.

How to watch the Elimination Chamber

How will these powerhouses set their path to WrestleMania? Don’t miss all the action of WWE Elimination Chamber, LIVE on SuperSport DStv Channel 128 at 19:00 on Saturday and streaming live on WWE Network.

The current match card is confirmed for the Elimination Chamber on Saturday night.