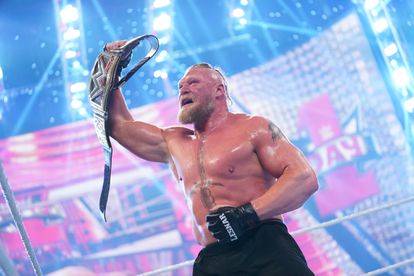 WWE kicked off 2022 with an absolute bang as Day 1 went out to the sports entertainment universe.

The first-of-its-kind for WWE,Day 1 set the tone for what to expect from our favourite superstars.

The WWE Universe witnessed memorable moments that set the tone for the rest of the year.

Here is a recap of what you missed at the inaugural WWE Day 1 Premium Live Event:

Just an hour before the show was set to go live, news broke that WWE Universal Champion, Roman Reigns had to withdraw from the main match because he tested positive for Covid-19.

Brock Lesnar, who had been due to meet Reigns in the squared ring for the Universal Championship, was subsequently added to the WWE championship match, turning the bout into a fatal five-way.

This turned into an explosive match where The Beast took advantage of his addition to Day 1’s main event by defeating Big E, Seth Rollins, Kevin Owens and Bobby Lashley to claim the WWE Championship.

The Celtic Warrior quickly taught his protégé, Holland who sustained an injury, a lesson in what it takes to win, as he took things into his own hands to win.

In what was essentially a handicap match, Sheamus defeated the newly formed pair of Cesaro & Ricochet in a hard-nosed match.

Since her return to WWE in 2021, Lynch remains the undefeated Raw Women’s Champion.

The two heated rivals exchanged knockout blows, including a tremendous modified sunset flip powerbomb from Morgan, but they could only keep the other down for a two-count each time.

Despite Morgan’s efforts in their rematch, there seems to be no match for Lynch.

In another exhilarating showdown between the longtime rivals, Kingston went for a quick rollup, but Jimmy Uso tagged himself in, and The Usos won with a 3-D on Kingston to score the pin.

Cheered on by Migos at ringside, the Raw Tag Team Champions used the extra motivation to defeat The Street Profits and retain their Raw Tag Team titles.

The Raw Tag Teams showed great sportsmanship afterwards as RK-Bro and The Street Profits shook hands and celebrated in the ring with Migos.

Edge vs. The Miz

The Miz and The Rated-R Superstar traded blows from the get-go before a diversion from Maryse, which allowed The Miz to capitalize and send Edge flying into the ring post and outside barricade.

Despite Maryse’s efforts to help the A-Lister defeat Edge, Beth Phoenix returned to scare Maryse off, allowing Edge to hit a devastating Spear on The Miz for the win.

The Scottish Warrior wiped the smile right off Madcap Moss’face with a devastating Claymore.

Moss barely got out of the gates before McIntyre’s power was on full-force, as the powerful former WWE Champion tossed Moss all over the squared circle.

With all its rulers; Day 1 has set a precedent on the kind of action the WWE Universe can expect in 2022.

With the Royal Rumble only a few weeks away, will these champions continue their dominance?

If you missed the live action from Day 1, you can catch it on the WWE Network or DStv Catchup.