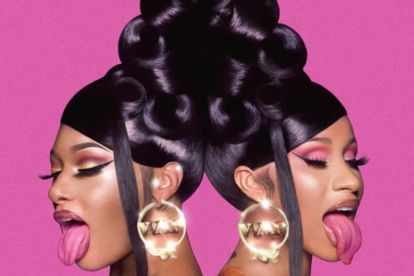 Megan Thee Stallion has already collaborated with Beyoncé and Nicki Minaj, two prominent names in the music industry. Now that she features on Cardi B’s new track, WAP, it’s so obvious that working with Cardi is the collab we didn’t know we needed!

Cardi hosted a live chat on her YouTube channel with Megan to flag the release of the video.

The eye-catching song cover and teasers lived up to their expectations.

The two rappers unpacked the highs and lows they faced and how Megan was the perfect fit to feature. In some shots, the two look like twins – big, bold and beautiful sisters.

You can literally feel their nerves and excitement in the video chat. The comments on their interaction were also uplifting making this a significant moment for black women in hip-hop.

Cardi is queen of bold looks

Cardi B’s choices in her music videos have always maintained daring aesthetic choices: From hair — and all the way down — to the theme of each set.

She has also been open about inclusivity with those “behind-the-scenes” glimpses into how she makes some of her videos.

If you’re a Cardi B fan, you’ll know that her Money video kept us talking too.

Then there was Cardi’s famous Invasion of Privacy album cover. In Women’s Month in particular, we love to see women thrive in male-dominated spaces!

Why we love this for Megan

It’s been a whirlwind for the American rapper Megan Thee Stallion. After facing controversy on her record label earlier this year, a “friend” shot Megan in her feet last month.

She has not identified the shooter, and it is not yet completely clear if it was an accident or not. During an emotional Instagram Live chat soon after Megan said she had felt betrayed and traumatised.

Even so, social media praises her continuously for being unapologetic and positive with her team and other celebrities she has worked with.

Megan and Cardi both have bold alter-egos and alluring looks that we can’t get enough of!

The colourful and eccentric mansion features wild animals and cameos from our favourite celebrities outfitted in different looks.

Keep an eye out for Spanish singer-songwriter Rosalina, singer and dancer Normani and musical artist Rubi Rose, along with Mulatto and Sukihana.

Even great bodies of work have their fair share of criticism.

Some fans were livid over Kylie Jenner’s cameo because of what the video embodies for black women.

They argued that it was unnecessary and there should have been a notable black artist in her place instead.

We are looking forward to the memes, reaction videos and think-pieces that are likely now to be flooding in.