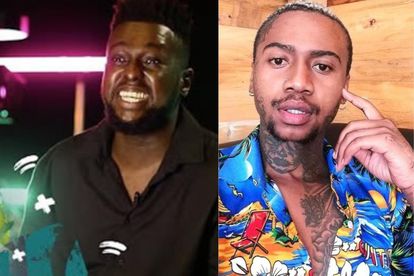 It’s only been three days and Big Brother Mzansi (#BBMzansi) viewers are swooning over Themba (Lil Wayne) and are already counting down to Mvelo’s exit.

Viewers are in two minds about Mvelo’s personality and can’t figure him out.

#BBMzansi viewers are fed up with housemate Mvelo Ntuli and would like Themba Lil Wayne to make it to the finals.

Audiences do not understand Mvelo’s personality and are annoyed with him already.

Fans of the reality show started disliking him when the housemates shared their backgrounds.

According to #BBMzansi Mvelo didn’t seem genuine when he was sharing his childhood stories as he was giggling about everything.

The reality star is also not in the good books with tweeps because he’s always holding a plate of food in his hand.

“This Mvelo guy is just there to eat!” exclaimed one viewer.

Another said, “Every time I see Mvelo… he’s holding a plate or eating.”

WHO IS MZANSI’S LIL WAYNE?

#BBMzansi has their version of Lil Wayne who is as heavily tattooed as the United States rapper.

His real name is Themba Karabo Mabaso and he’s a 30-year-old artist from Johannesburg. He’s revealed that he’s got two kids, a boy, and a girl, and describes himself as “simple”, “basic” and “normal”,

He also mentioned in his interview that he doesn’t actively seek the spotlight despite his attention-grabbing looks.

Viewers of the show love his authenticity, humour, and honesty…

A fan tweeted that he always tells it like it is no matter what.

“#BBMzansi Can we Vote Mvelo out, please?”

“I want Themba aka Lil Wayne to win.”

“Mina I love him for his imperfections. I’ll die with Themba/Lil Wayne.”

“I think Mvelo comes off as very fake to me.”

“I wouldn’t mind him if he was comfortable in himself but he’s always trying to convince us that he’s straight.”

“He doesn’t even need to discuss his sexuality.”