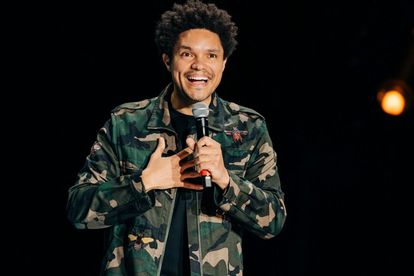 Trevor Noah is once again being dragged on over his silence. Image via Twitter @Trevornoah

Trevor Noah is once again being dragged on over his silence. Image via Twitter @Trevornoah

The beauty about music is that if you don’t know the lyrics, everyone usually just makes up their own. South African-born comedian and The Daily Show host Trevor Noah hilariously shared how Mzansi flipped Michael Jackson’s Don’t Stop ‘Til You Get Enough lyrics.

The video clip which has reposted by The Daily Show, even sparked a few comments from fans in other countries about how they came up with their own Michael Jackson’s lyrics as well.

‘DON’T STOP ‘TIL YOU GET ENOUGH’…THE MZANSI WAY

In 2018 while interacting with the audience on The Daily Show, Trevor Noah decided to poke fun at Michael Jackson‘s vocal style.

“If you think about all the stuff he was saying, you didn’t hear it, you just sang along most of the time,” said the award-winning comedian.

Noah further explained that when Michael Jackson’s 1979 smash hit, Don’t Stop ‘Til You Get Enough, grew popular in South Africa, everybody thought the “King of Pop” was singing in Setswana.

While the actual lyrics read: “Keep on with the force don’t stop. Don’t stop ‘til you get enough.”

This translates to: “There they are in their tight jeans, their money is finished.”

HOW THE WORLD INTERPRETED THE LYRICS

After The Daily Show reposted the clip on Instagram, fans took to the comments to post what they thought the Don’t Stop ‘Til You Get Enough lyrics were.

One fan wrote: “It’s funny because we Congolese people thought he was speaking Lingala.” (Lingala is a language used by millions of people in Congo.”

“There was us Igbo-Nigerians thinking he was singing the line in Igbo language and we conveniently song it with a mix of West African Pidgin English. And it worked.”

Another wrote: “I’m from Kenya and we thought he was singing in Kikuyu too, which is my mother tongue.”

Trevor Noah joined his friends Anele Mdoda, Sizwe Dhlomo, Khaya Dlanga and communication executive Xolisa Dyeshana for a getaway at Clos Malverne Wine Estate in Stellenbosch. The group of friends also spent some time in Cape Town. The successful comedian brought along his girlfriend Minka Kelly for the trip. They all gathered for Dyeshana’s birthday party.

Besides catching up over lunch and drinks, the friends also went bowling at GrandWest Casino in Cape Town.