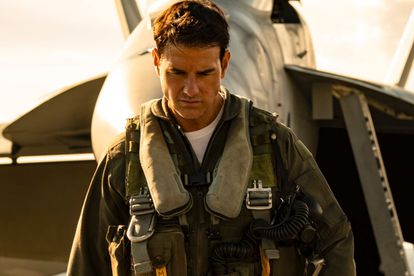 The Tom Cruise-led film ‘Top Gun:Maverick’ has officially surpassed the classic drama ‘Titanic’ as the seventh highest-grossing film in the United States. Image via Twitter @TopGunMovie

The Tom Cruise-led film ‘Top Gun:Maverick’ has officially surpassed the classic drama ‘Titanic’ as the seventh highest-grossing film in the United States. Image via Twitter @TopGunMovie

High-flying film lovers were buzzing with excitement after it was announced that American actor Tom Cruise would be reprising his role as Pete “Maverick” Mitchell in the Top Gun Sequel, Top Gun: Maverick.

Nearly three months after the release of the action-packed film, it has officially taken over the classic 1997 film, Titanic, as the seventh highest-grossing film at the United States box office.

Top Gun: Maverick marked the return of Oscar-nominated actor Tom Cruise and director Joseph Kosinski. In the film, Cruise reprises his role as Maverick Mitchell who trains a group of young graduates for a special assignment.

The film was officially released on 27 May and has accumulated millions in global ticket sales. According to Variety, Top Gun: Maverick has earned $662.5 million (Approximately R11 billion) in ticket sales.

This means the action film has officially overtaken Titanic starring Kate Winslet and Leonardo DiCaprio as the seventh highest-grossing film in the United States. At the time of its release, the film sold $659 million (R10.9 billion) in ticket sales.

According to Variety, Tom Cruise will earn more than $100 million (R1.7 billion) from his Top Gun: Maverick salary, ticket sales and his share of streaming revenue.

“I would never bet against Tom Cruise,” a studio executive told the publication.

“Most actors aren’t worth what you pay them, but Cruise and maybe Dwayne Johnson justify their salaries.”

Despite the Oscars slap drama, Will Smith followed closely behind Tom Cruise with $35 million (R601 million) for his upcoming film, Emancipation. The film, which will be helmed by Apple+, is based on the story of a runaway slave who aims to reach the Union Army.

WHAT ARE HOLLYWOOD’S HIGHEST-GROSSING MOVIES?

According to CNBC, these are the Top 10 highest-grossing films of all time in the United States.