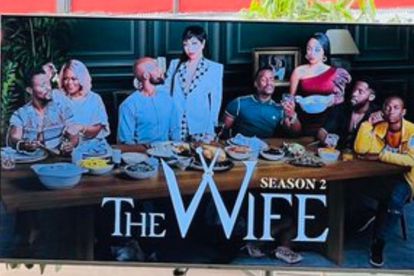 Speculation has been rife about the bloddied woman under the table in the poster of ‘The Wife’ season two. Image via Twitter @PhilMphela

Speculation has been rife about the bloddied woman under the table in the poster of ‘The Wife’ season two. Image via Twitter @PhilMphela

The poster of season two of Showmax’s original telenovela The Wife has caused quite the frenzy among fans.

This comes after entertainment commentator Phil Mphela shared the poster from the launch of the upcoming season on his social media.

WHO’S THE BLOODIED WOMAN IN THE POSTER?

Viewers of The Wife have been wondering who’s the woman hiding under the table on the season two poster.

It all began when one fan zoomed in on the poster and noticed that there’s a bloodied woman with high heels laying under the table.

Fans think the woman is Mqhele’s baby mama since he impregnated his mistress in season one.

Qhawe thought that she deserved better than Mqhele and even slept with Hlomu on the season one finale.

OTHER PREDICTIONS FROM VIEWERS

Zandile was the matriarch for the Zulu brothers years before Hlomu and Mqhele got married.

Viewers now predict that Hlomu and Zandile will not get along in the upcoming season and that the pair will butt heads.

The season two teaser showed Zandile’s children calling Hlomu their mother when she got out of prison.

ALSO READ:‘The Wife’ fans react to Hlomu sacrificing her career for the Zulus

The Wife season two will focus on Zandile (Khanyi Mbau) who is the wife of Nkosana (played by Mondli Makhoba), the leader of the Zulu brothers’ family.

Executive producer Gugu Ncube-Zuma, who is the producer of the show told Drum Magazine.

“We’ll be exploring Nkosana and Zandile’s love story and finding out more about their history.”

“We’ll get to know Zandile as the matriarch of the Zulu family, the glue who held the Zulu brothers together. “

“In season two, she wants to reclaim her position, a role that uHlomu has now taken over in her absence.”

“Get ready to see the world through Zandile’s eyes.”

Season two of The Wife will premiere this Thursday, 17 February on Showmax.