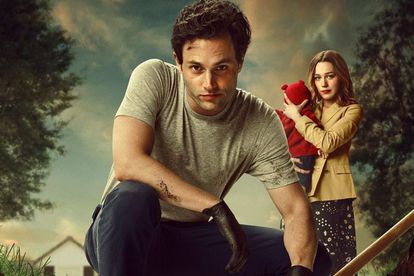 Netflix dropped the official trailer for ‘You’ season three. Image via Instagram @younetflix.

Netflix dropped the official trailer for ‘You’ season three. Image via Instagram @younetflix.

Netflix released the official trailer for the much anticipated thriller You season three on Friday 17 September.

The third season of the gripping thriller releases on Netflix on 15 October. Just two weeks after dropping the teaser of the series, Netflix has dropped the official trailer.

From the looks of it, serial killer Joe Goldberg (Penn Badgley) is actually scared of his equally murderous wife Love Quinn (Victoria Pedretti).

“In my history of scared, this is the most scared I’ve ever been,” narrates Joe in the trailer.

“I’ve always believe in the one but being your dad is changing me. For you I’ll move to some soulless suburb. For you I’d marry the monster. Your mother, love. What could go wrong?,” says Joe to his son.

Although Joe is borderline terrified of his wife this season, she seems to be as excited as ever. Love Quinn decided to move to a new suburb and set up shop for her family to get a fresh start following their trail of murders.

However, old habits seem to die hard for Joe Goldberg who begins to stalk his new neighbour. Love notices Joe is up to his old tricks and suggests they go to couples therapy.

“(They are) surrounded by privileged tech entrepreneurs, judgmental mommy bloggers, and Insta-famous biohackers. Joe is committed to his new role as a husband and dad, but fears Love’s lethal impulsiveness,” read the series synopsis.

“And then there’s his heart. Could the woman he’s been searching for all this time live right next door? Breaking out of a cage in a basement is one thing. But the prison of a picture-perfect marriage to a woman who’s wise to your tricks? Well, that’ll prove a much more complicated escape,” the synopsis continued.

A new suburb, a new baby and a new murder victim. Watch the trailer or You season three below.