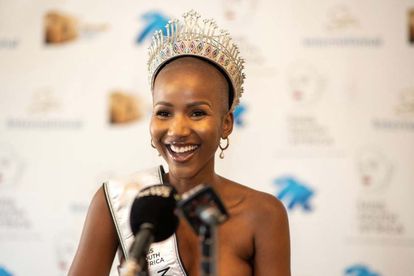 Adding to its silence, is the organisation’s attempt to shift its focus from responding to the backlash to shining the light on another beauty queen; Miss SA 2020 Shudufhadzo Musida, who will soon be taking part in Miss World 2021.

Shudu will be competing at the pageant set to take place on 17 December 2021 in Puerto Rico.

Miss SA shared an update on their Instagram account of Shudufhadzo Musida’s journey to the Miss World pageant, which will happen in exactly one month.

“A new journey begins for our @missworld South Africa, @shudufhadzomusida, as she heads to Puerto Rico! 1 MONTH TO GO!”, the organisation captioned the clip of the 25-year-old beauty.

They followed up the post with another thirst-trap picture of the model who has just returned from a trip to Paris.

‘What about Miss Universe?’

But despite their plans to divert attention, many followers reminded the organisation in the comment section of the post, of the pressing issue at hand.

“What about Miss Universe?”

“Free Palestine. Is this really news? No response to your country distancing themselves from your copout trip to IsraHell? What a joke Miss South Africa”.

“Our elders are turning in their graves because we have forgotten who we are”.

According to eNCA, Miss SA CEO Stephanie Weil stated that the organisation would respond “in time” following the South African government’s decision to withdraw their support.

In an interview with Radio 702 last week, the pageant head also defended their stance on not boycotting the competition

Meanwhile local author and Twitter personality Khaya Dlanga has voiced his opinion on the “Miss SA in Israel” saga, claiming that Lalela Mswane should go ahead and participate.

Lalela Is due to represent South Africa – albeit without the government and many citizens’ support – at the Miss Universe pageant in Eilat, Israel, on 12 December 2021.

He wrote on his IG Stories, condemning authorities for their actions:

“The SA government crossed the line by issuing a statement withdrawing its support. They have put a young woman in an impossible position.”.

He continued: “Be that as it may, this government seems big on symbolic actions. This government has not imposed sanctions against Israel nor travel restrictions. Instead, they are grandstanding on the shoulders of a young girl.

“Why throw her under the bus when they have not made meaningful commitments? Let her go.”