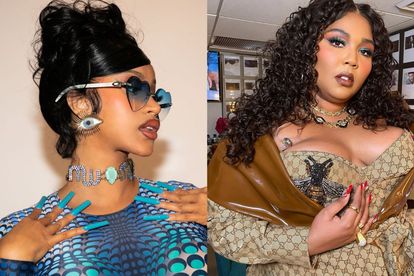 Cardi B and Lizzo Images via Twitter @iamcardib @lizzo

Cardi B and Lizzo Images via Twitter @iamcardib @lizzo

Cardi B and Lizzo are two of the most confident and out-loud characters in the music industry today. These two women have released timeless hits over the years and are now getting ready to release their first collaboration together!

CARDI B AND LIZZO ARE COMING!

Grammy-award winning Cardi B took to her Instagram page to share the exciting news of her collaboration with Truth Hurts hitmaker, Lizzo.

In her post’s caption, she said the rumours were true and the collaboration is indeed on the way! The two Grammy award-winning artists will drop their single on 13 August and it is titled Rumors.

Cardi B’s post was accompanied by a raunchy picture of the two women’s stunning long brown nails with only their mouths in the frame.

“All the rumors are truuuuue – me n my sis Lizzo dropping this friday get ready.”

Cardi B teamed up with Megan Thee Stallion last year in August, to release their high-energy single WAP. The music video was unfortunately met with plenty of controversies upon its release.

Member of the American Republican party, DeAnna Lorraine, had tweeted that the two women had “set the entire female gender back by 100 years”.

Celebrating the one-year anniversary of WAP’s release on Twitter, Cardi hinted at a follow-up to the song. Megan Thee Stallion seemed on board with the idea and hopefully, it’ll happen sooner than later!

CARDI B AND NORMANI’S ‘WILD SIDE’

Normani featured Cardi on her single Wild Side, which was released on 22 July. The single release was accompanied by a stunning music video where both artists let loose and just had fun.

The sultry music video was directed by Tanu Muino who has previously worked with both Cardi B and Normani.

Munio worked with Cardi B on her Up music video and with Normani on her 2019 Motivation music video.