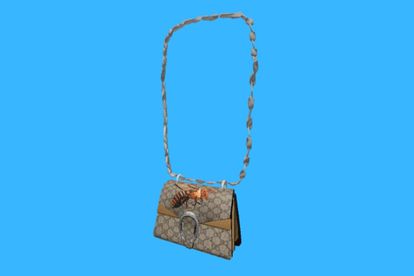 Yes, the Gucci Dionysus bag was sold on the Roblox gaming platform where buyers used Roblox virtual money, which does not count as a cryptocurrency and can only be used in that application.

The surprising thing is that it is not an NFT – that is it has no value, use, and is not interchangeable, and ultimately cannot be used outside of Roblox. In addition, the item was more expensive than an original Gucci Dionysus physical bag, which has prices ranging from $2 418 (over R30 000) to $2 686 (R36 000) according to the Gucci Spain virtual store.

What is Roblox and the Gucci Garden Experience?

According to Entrepreneur, it is a gaming platform that, in addition to playing, allows developers to create video games from imaginary virtual universes.

Recently, taking advantage of the boom in sales of virtual objects, they launched the Gucci Garden Experience, where creators could buy brand items to dress their characters.

The Gucci Garden Experience was launched to mark the Italian fashion brand’s 100th anniversary. It’s the virtual version of Archetypes, an ongoing exhibition at the real Gucci Garden in Florence. The Roblox world features an immersive gallery where Roblox players can explore Gucci’s past creative campaigns and designs.

The online gaming platform, is said to be home to millions of players and Gen Z-ers, and offered the limited-edition piece on 17 May to mark the launch of the experience.

Apparently, Gucci items were available on the platform for a short time and at reasonable prices. However, once the sale was over, they began to be resold at prices that raised the value of the bags, even higher than their physical counterparts.

According to Lifestyle Asia, the virtual Gucci Dionysus bag can still be bought on Roblox’s Avatar Shop, along with other virtual collectables released through the Gucci Garden Experience. That includes a Gucci Bloom perfume, a pink GG Marmont bag and a red floral Dionysus handbag.