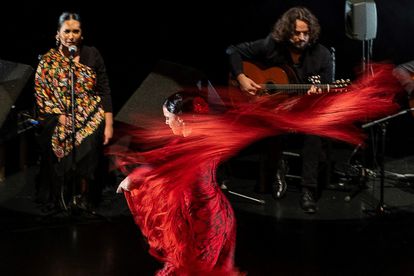 Rising stars from the Spanish flamenco scene perform the show ‘From Triana to Granada’ on 3 and 4 June 2022. Image Supplied

Rising stars from the Spanish flamenco scene perform the show ‘From Triana to Granada’ on 3 and 4 June 2022. Image Supplied

Castanets, colourful ruffled dresses and sensuous stylized movements will be on display as authentic Flamenco from Spain takes to the Artscape stage for three shows only from 3 to 4 June.

Direct from Seville (Spain) the production From Triana to Granada showcases the incredible talent of eight young artists of the Foundation Cristina Heeren of Flamenco Art who were winners of the renowned Talento Flamenco ACCIONA contest.

ABOUT FLAMENCO FROM SPAIN

Brought to South Africa by the Consulate-General of Spain and the Cristina Heeren Foundation of Flamenco Art, with the support of the Embassy of Spain, it is directed by the great flamenco dancer and choreographer Luisa Palicio.

It highlights several different choreographies in which the talents and qualities of each of the participating artists are respected and underlined; virtuosos who through their tenacity and perseverance have become young rising stars of flamenco dance, song and beats.

The show opens with a contemplative Seguiriya, graduates to casual and sensual Tangos of Granada, and crescendos to a marvelous Caña showcasing flowy long flamenco dresses accompanied with joyful Alegrías of Cádi.

Accompanied with moments of magical singing of Soleá from Triana, and an intimate guitar solo in the Rondeña style, it offers different styles and facets of flamenco in order to prove the variety and greatness of this music genre.

The group’s Flamenco technique embodies the roots of the dance emanating from the South of Spain, the region of Andalusia.

WITNESS THE PROWESS OF TWO GUITARISTS

Patrons will witness the prowess of the two guitarists Pablo Fernández and Emiliano Litri (guitarists), the musicality of the two singers Marian Fernández and África Granado and the magnificence of the four bailaores (dancers) Irene Rueda, Araceli Muñoz, Lucia Fernández and Juanjo Ortega).

As young dancers, their expertise in their fluidity, synchronisation and imaginative interpretations is set to enthral dance lovers. As individuals too they’ll flaunt their mastery.

Among others Marian’s mastery of “cante” are sure to delight. The highly original details that permeates Irene’s dance as well as Araceli and Lucia’s original “paso a cuatro por alegrías” that closes the performance will reveal Luisa Palicio’s mastery in turning that turned what was once just a recital piece into a show as part of the program of Flamenco Viene del Sur.