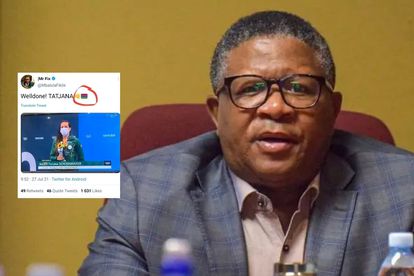 The minister, who is currently going with the name ‘Mr Fix’ on Twitter (at one time it was ‘Mr Fear Fokol’), shared a celebratory tweet after Schoenmaker took the silver medal in the 100m breaststroke earlier in the week.

While most Twitter users assume that he wanted to share the South African flag emoji, he actually shared the flag of Gambia along with the congratulatory tweet.

What flag is that?

Schoenmaker also won South Africa’s first Olympic gold medal in Tokyo in the women’s 200m breaststroke final on Friday, 30 July setting a new world record in the process. But, tweeps could not get past Fikile’s tweet:

“Mbaks! That flag…!? Is it from the kingdom of Babetikoswethi…?? Maybe you forgot, but you are in Satafrika now,” said @SauerJacques. “Wrong flag Mr. Mbalula. You ate the ‘KOO’ flavoured beans neh!” said @ThabisoTuss.

“You are a whole minister and you couldn’t even put the right flag in a tweet?” said @IAmLuke_M.

The fact that Fikile is the former Minister and Deputy Minister of Police and Minister of Sports and Recreation was another shocker for South African tweeps.

“A whole minister who doesn’t know the difference between the SA and Gambian flags. Explains a lot,” said @Slygathor1. Others were less critical: “We’ll excuse you. Gambia is in Africa..Close enough,” said @RSander40688451. “But we are not Gambia Mr Fix…They’re laughing at you man”.

History in the making

Schoenmaker made history by becoming the first South African woman swimmer to win an Olympic gold medal since Penny Heyns at the 1996 Atlanta Olympic Games.