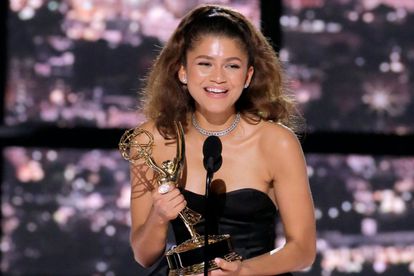 Zendaya wins big at the Emmys. Image via Twitter @McKenzie_JP.

Zendaya wins big at the Emmys. Image via Twitter @McKenzie_JP.

The three-hour 2022 Emmy Awards were hosted by Saturday Night Live actor Kenan Thompson, who kept the crowd entertained with his jokes. Succession took home the highest honour of the evening, the Outstanding Drama Series Award. The series beat out the likes of Stranger Things, Squid Game and Euphoria for the award. Succession also won the Emmy for Outstanding Writing in a Drama Series.

Matthew Macfayden scooped the Supporting Actor in a Drama Series Award for his role as Tom. Macfayden’s co-star, Kieran Culkin, was also nominated for the award.

“It is such a pleasure and a privilege for me to play this bonkers gift of a role in this wonderful show,” said Macfayden while accepting his award.

“My admiration and my gratitude for Jesse Armstrong and his remarkable writing team is boundless. They are truly amazing.”

Accepting her award, Zendaya said she was honoured to be nominated alongside side Hollywood stars like Reese Witherspoon and Sandra Oh.

“Thank you to the incredible casting crew of Euphoria. Thank you for making such a safe space to make this very difficult show. I love you all so much,” said the 26-year-old.

Outstanding Reality/Competition Series: Lizzo’s Watch Out for the Big Grrrls