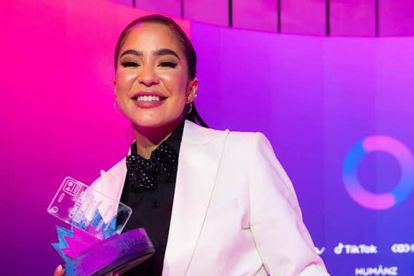 The inaugural DStv Content Creator Awards took place on Saturday 10 September at The Galleria in Sandton, Johannesburg. Influencer Nadia Jaftha was the evening’s biggest winner after she walked away with three awards including the top prize, the Content of the Year Award.

The inaugural DStv Content Creator Awards were hosted by comedian Loyiso Madinga, who kept the audience entertained with his hilarious jokes. The awards opened with a performance from the Bontle Modiselle Dance Studio.

The performances included popular sounds from the likes of Khanyisa Jaceni, Moghelingz, Chad Jones and the multi-talented, Robot Boii.

Some of Mzansi’s A-listers all attended the awards including the likes of Lasizwe Dambuza, Donovan Goliath, Tamara Dey, Melanie Bala and Zanele Potelwa.

Cape Town-based influencer and actress Nadia Jaftha was the biggest winner at the DStv Content Creator Awards and walked away with three awards. Speaking on her win, Jaftha said it was an honour to be recognised for her craft.

“Never in my wildest thoughts did I think that I would win three awards,” she said.

How I Shot It Award: Donovan Goliath

Podcast of the Year: Our Love Journey With Mpoomy & Brenden