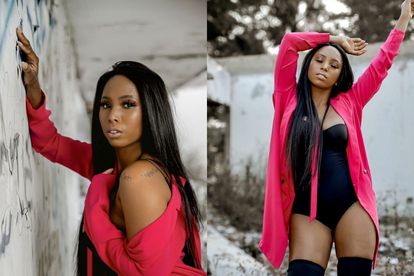 South Africa has not heard from Denise Zimba for some now because she took time out to focus on raising her beautiful baby girl Leah. Now the television personality and musician is back on the entertainment scene and she is coming in hot with a new single Thobela.

Speaking to Drum, Denise shared that she met her partner who just so happens to be from Germany and later decided to up and leave South Africa to head for the Western European country to focus on her family life.

Denise has been sharing cheerful videos and photos with her daughter Leah on her Instagram leaving us to deal with the cuteness overload.

Sharing her experience about motherhood as a new mom she advises new mothers to be kind to themselves.

“I learned to be kind to myself and not forget who I am. As a black woman, the pressures we live by and the people we have to carry can be a lot and the best advice I could give is to be kind to yourself.”

Denise has presented, she’s acted and she’s released music before. She teased her single Thobela on her social media pages before officially releasing the song on 3 September.

She says with this single, she wants to be able to control and create her own narrative. “Thobela” translates to “Hello” in Sepedi.

She collaborated with superstar producer Profound on the single.

“Having focused on raising my daughter for the past two years, I’m in a position where I feel like I want to give my music the attention it deserves and have some fun doing what I’ve always loved most!!”

Denise has an extensive background in entertainment previously being the host of V-Entertainment on Vuzu and acting on Generations: The Legacy as Mary Gumede.

Denise Zimba’s fans can hopefully expect more music from her as she says Thobela is only the beginning of her musical journey. This is not her first music single. She was featured on Sean Pages’ single We Just Different in 2016 and released a solo single in 2020 titled OK.