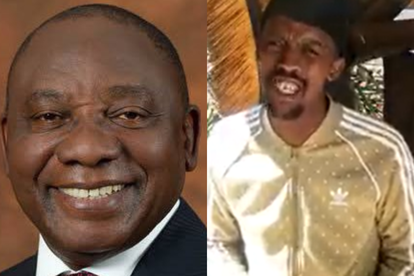 This guy knows why Ramaphosa did not call the police. Images via Twitter: @CyrilRamaphosa/@mmodiba10

This guy knows why Ramaphosa did not call the police. Images via Twitter: @CyrilRamaphosa/@mmodiba10

South Africans have not stopped buzzing over President Ramaphosa’s Limpopo game farm robbery. According to various reports, Ramaphosa’s game farm was robbed in 2020. Ramaphosa failed to report to the South African police service that millions of dollars were stolen from the property.

The scandal has left locals with a lot to say but one man, in particular, had some of the funniest comments about “Uncle Cyril” and his refusal to speak to the police.

President Cyril Ramaphosa has left a lot of questions unanswered around the reports about his Limpopo game farm being hit by brazen robbers who walked away with millions.

In the meantime, South Africans have taken to social media to try and make sense of the claims as well as why the president would decide against opening a police case.

One funny guy believes that he knows the answer and many South Africans can surprisingly relate.

The comedian has gone viral after a video of him explaining Ramaphosa’s mindset was shared on Twitter by a user with the handle, @mmodiba10.

In the clip, the man, identified as Dylan Oliphant, claims that the president – like many South Africans – has lost all faith in the country’s police system.

According to him, not calling the police after getting robbed is actually a very South African thing to do.

“Uncle Cyril knows, when the police say they are dealing with a case, it means they are having beer,” he hilariously says in the clip.

And while the decision not to alert the necessary authorities is irresponsible, the funny guy says it actually brought Ramaphosa closer to his people.

“Cyril, I thought you were out of touch with your people but not calling the police is the most South African thing you could do. I haven’t felt closer to my president than I do today,” he says.

The post left people in absolute stitches as they shared their thoughts on the whole matter.

“This guy can fill the void that Trevor Noah left when he joined the Ramaphosa cheerleading group..”

“Talent right there. His humour is on another level. SA is alive with possibilities.”