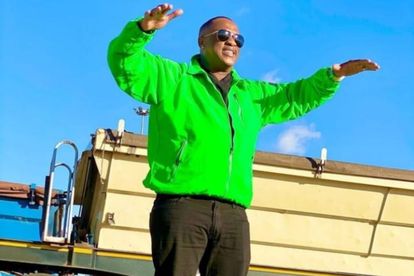 We’re used to seeing men and women react in shock, terror and even anger when they get-caught dipping their fingers into the proverbial cookie jar.

But freestyling – that’s a first!

On Sunday night’s episode a man by the name of Rasta went viral after he started rapping when confronted by host Jub Jub.

The shamed spouse started spitting bars after he was caught cheating red-handed or “making music on top of another woman” as his partner Unathi claimed.

Uyajola 9/9 tweeps were thoroughly entertained when Rasta denied to the escapade, only to drop a diss track on Jub Jub

“So back off, you crossed the line”, he ended the freestyle, directed at the former singer.

“Not the cheater doing a freestyle, telling Jub Jub to Back off,” claimed one tweep of the hilarious exchange.

“Deny deny and then freestyle, I love Rasta”, said another.

A third believed South Africa had discovered it’s next star.

WHAT HAPPENED TO JUB JUB’S VOICE?

And it wasn’t just the rising rapper who trended on Twitter – fans took to Twitter to poke fun at Uyajola: 9/9 host Jub Jub’s voice too!

Jub Jub has been vocal about recovering from Covid-19 and how he believes that his weight loss is as a result of it.

He said in a recent Instagram Live chat: “ I had the most devastating experience of my life, I never thought I would go through that.