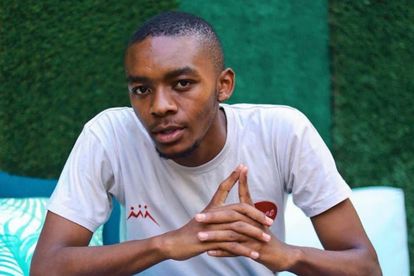 The world was first introduced to Tunez RSA when he was stopped to give his opinion about the unrest in South Africa.

The 24-year-old rapper happened to be at Jabulani Mall at the same time as the eNCA camera crew and broadcasted himself to the world. Now, Tunez RSA is about to be a big deal!

Thando Ngubeni known popularly by his stage name Tunez RSA received a flood of support after promoting his single Higher and higher on eNCA.

“I’m here to promote my music! I’m Tunez RSA! Mr International Kippiza! Shoutout to Kippiza! We’re doing this sh*t for the love of the music.”

The clip went viral instantly and grabbed the attention of the right minds in the industry.

Controversial podcaster MacG called Tunez RSA on his show to find out what’s been happening since he promoted his music live on national television.

The rapper expressed that he can’t keep up with everyone who’s been reaching out to him because his notifications have been going crazy! He mentioned that he certainly wasn’t expecting the support he received from the public.

Answering what he was doing at Jabulani Mall, he said he was passing by on his way to his studio when he saw the looting.

He thought to himself that he should stop to get some footage for his Instagram. After noticing the eNCA cameras he saw an opportunity to market his music.

The rapper revealed that his music fell into the right hands and told MacG that hip-hop heavyweight Slikour has offered the rapper a distribution deal.

Tunez showed gratitude towards everyone who has ever supported him in his journey as an artist.

He ended his interview with a few bars, rapping enthusiastically expressing his love for MacG’s podcast.