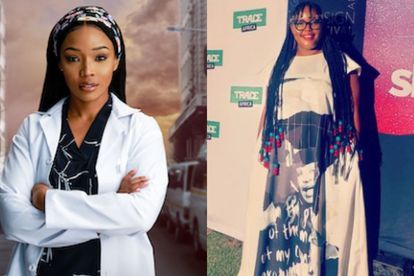 Author of The Wife – Dudu Busani-Dube has reacted to the casting news of actress Gaisang Noge – who plays the role of Naledi – Qhawe’s wife in the hit telenovela.

News of the actress joining The Wife caused quite an uproar on social media yesterday following the announcement.

The Wife has been trending for the past two days since fans of author Dudu Busani Dube’s book expressed disappointment that actress Gaisang Noge landed a role as Nale on the show.

Viewers and readers of The Wife felt that Noge did not match the description that is in the book “Naledi His Love”.

This is because Naledi is described as a plus-size woman in Dube’s book Naledi His Love.

“The whole point of her story was to bring women body politics into the picture, into conversations. She’s a size 40/42.”

The author recently defended Noge in a Facebook Live:

“I know you guys have only seen a picture, she’s not skinny. She is not skinny in fact, she’s almost my size if we’re not the same size.

“Just doesn’t have the big boobs that I have and umkhaba. She has that flat stomach and perfect sdudla shape. She’s not a thin woman.”

“I don’t think that whatever they put out did justice to her body and how she looks.”

ALSO READ:‘The Wife’: Abdul Khoza reassures viewers he is not leaving the show

‘THE WIFE’: ‘NALEDI AND QHAWE HAVE A CONNECTION’

Dube also told her fans that Noge came and that when she walked in she had eye contact and it was the most amazing thing.

“Okay, it’s fine she’s very slim at the top but she’s very big at the bottom.”

“I also kind of felt like, okay this is it.”

““Her energy, her face, her humbleness. I had a connection with her, just like Mbali.”

“I had a connection with her the moment I saw her”.

The author added that actors Noge and Kwenzo Ngcobo who play Naledi and Qhawe have a connection.

“Their interaction during the meet-up left her impressed, including how Noge helped herself to his food, “which is so Naledi, she’s bullying him!”.