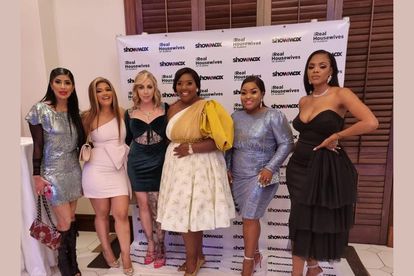 ‘RHOD’ stars at the premiere. Image via Instagram @sorishanaidoo.

‘RHOD’ stars at the premiere. Image via Instagram @sorishanaidoo.

The first episode of the second season of the Real Housewives of Durban (RHOD) released on Friday 28 January. Here’s three bombshells from the first episode.

The first episode of RHOD season two saw the ladies catch up one-on-one before meeting all together at Nonku William’s event. The ladies also briefly addressed their issues from the first season, specifically the tribalism claims.

This became the topic of discussion when Nonkanyiso “LaConco” Conco only invited Ayanda Ncwane and Nonku to her event. So, she excluded housewives Sorisha Naidoo, Anne-Tonni Lodick-Mthembu and Kgomotso Ndungane — who are not Zulu speaking.

This season picked up the pieces but both Ayanda and Kgomotso are not a part of season two. Here’s the three bombshells from episode one.

1. LACONCO OPENS UP ABOUT HER RELATIONSHIP WITH JACOB ZUMA

Former President Jacob Zuma’s ex-fiancée Laconco revealed that she is raising their son with her mom. This means that Zuma is no longer in the picture. This made for the perfect cliffhanger on season two of RHOD.

LaConco explained that there were people interested in her relationship which eventually led to it ending.

“I never knew I would be at a stage where I am raising my son with my mom. I never fell in love… to be at this situation I am at today. I don’t think the scars will ever heal,” she continued.

Annie Tonni Lodick (now Mthembu) and Nonku had a one-on-one catch up. Nonku apologised to Annie for hurting her in anyway.

“If I hurt you in any way I do apologise,” said Nonku.

Nonku’s apology may have been sincere but it wasn’t enough for Annie, who said she did not like Nonku.

3. NONKU AND HER MOM ANGER TWEEPS UNDER #RHOD

Tweeps slammed Nonku and her mother for discussing Ayanda even though she is not a part of this season. Nonku and Ayanda’s late husband musician Sfiso Ncwane share a daughter together.

The reality star and her mom discussed why they thought it was only fair Ayanda pays damages for the child but Tweeps were not impressed. So, take a look…

‘Serves them right’: Sizwe reacts to ‘racism’ at Queen’s funeral

On This Day in South Africa: What happened on 20 September?