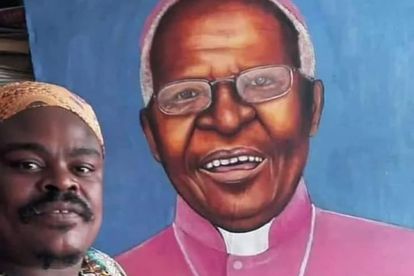 Rasta paints a portrait of Desmond Tutu
Image via Twitter

Rasta paints a portrait of Desmond Tutu
Image via Twitter

Desmond Tutu sadly passed away on the morning of Boxing Day, 26 December 2021. But just a few short hours later, controversial artist Rasta had already revealed a portrait of the world-famous icon.

As usual, the infamous star – real name Lebani Sirenje – had the Twitter timeline in a flurry over his artwork.

TWEEPS REACT: ‘THAT IS NOT DESMOND TUTU!’

Whilst it’s unclear if Rasta painted the portrait on Boxing Day or prior to that, tweeps still had a field day dissecting the piece of art.

Many commented at the speed at which he produced his latest celebrity portrait.

“I think Rasta gets the news first before the family”

“He always immediately has a painting of someone who has passed. What is he not telling us?”

As expected, many critiqued his painting skills too.

“That guy is not Desmond Tutu. We need to boycott Rasta, this is too much”

“Can someone please take away the crayons from Rasta”

“If Cyril and Mandela had a baby,it would look like this”

“On a serious note, Rasta needs some ass whooping”

Meanwhile another portrait painted by Rasta has gone viral – that of President Cyril Ramaphosa.

The artwork did the rounds on Twitter earlier this month after news broke that the president had contracted Covid-19.

And tweeps found the whole thing a tad too creepy, as the Zimbabwean-born artist is known for painting portraits of dead icons.

“Is something about to happen to Cyril?”

“Somebody please tag Cyril, his ancestors have commissioned his portrait and Rasta got the contract”