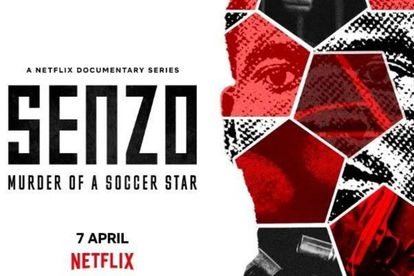 The Netflix docu-series, Senzo: Murder of a Soccer Star was released on Thursday. Image via Twitter @mystraw

The Netflix docu-series, Senzo: Murder of a Soccer Star was released on Thursday. Image via Twitter @mystraw

Soccer star Senzo Meyiwa’s mother – Ntombifuthi Meyiwa says she agreed to her late son’s Netflix docu-series Senzo: Murder of a Soccer Star because she wants to bring Senzo’s killers to the book and needed the money.

Mrs Meyiwa also revealed that her son’s death affected her husband’s death and led to his death.

NTOMBIFUTHI MEYIWA: ‘I NEEDED THE MONEY’

Senzo Meyiwa’s mother Ntombifuthi Meyiwa also stated that she started filming the Netflix series Senzo: Murder of a Soccer Star in 2019 and was promised a lump sum of money.

Senzo’s mother also added that Netflix approached her and that his death is also affecting her health.

“I needed the money and I agreed to do it, but we hope the series will finally see the killed being brought to justice for Senzo’s murder.”

She also tells the publication that her late soccer star son was the breadwinner in the family and that life has been hard for them since his death.

“Now that he’s gone, we largely depend on donations from private organisations. The whole ordeal is still overwhelming.”

THE NETFLIX DOCUMENTARY: ‘SENZO: MURDER OF A SOCCER STAR’

A number of neighbours and family members were also interviewed and signed a confidentiality clause and couldn’t disclose all the details.

“In the documentary, I explain how Senzo’s death affected my husband, Sam’s health and how it eventually led to his death.”

She also explains how it’s affected her health and put the family in poverty.

Senzo’sa daughter – Namhla Meyiwa has also told the People’s Paper that she’s happy with the documentary and hopes it will bring justice.

“I hope the public will get to see how difficult my life has been after my father’s death.”

The documentary Senzo: Murder of a Soccer Star will premiere on Netflix on 7 April.