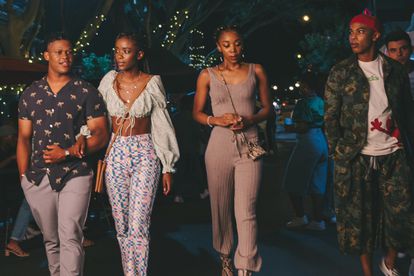 Dorothy Ghettuba who leads African Original Series at Netflix has confirmed that Blood & Water season three is in production in Cape Town.

Netflix original Blood & Water had viewers begging for answers after the end of season two — which was released on 24 September 2021. Season two ended on a cliffhanger that had everyone wanting more.. And they are getting it!

“We are so excited to announce we’ve renewed Blood & Water for a third season! Production has already commenced in Cape Town,” she said in a statement.

“Our production partners at Gambit Films – Nosipho Dumisa, Bradley Joshua and Daryne Joshua are just as excited and currently hard at work to bring viewers the best season yet of the popular series,” she continued.

Take a look at the first photo from production…

Fans were wondering if Natasha Thahane, who plays Wendy Dlamini on the series will be in season three. This is because she announced her pregnancy in March and many wondered if she would be able to conceal the glowing baby bump for her character.

YouTuber Slik Talk slammed Natasha for this after she announced her pregnancy.

Ghettuba says that they cannot disclose much about the production at this stage.

“While we can’t say much about the production at this stage, keep an eye out for further announcements on when audiences can expect to see the series on their screens,” She added.