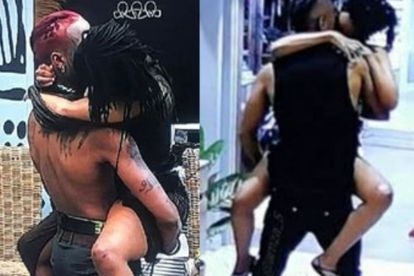 #BBMzansi Review: Why Venus cheated on B.U. with Themba. Images via Twitter @BucieMkhize1

#BBMzansi Review: Why Venus cheated on B.U. with Themba. Images via Twitter @BucieMkhize1

Fans of #BBMzansi (Big Brother Mzansi) were surprised when Venus and Themba started kissing last week after her housemate boyfriend B.U. got evicted.

They pitied B.U. because he declared his undying love for Venus when he exited the house and said he’d wait for her.

#BBMZANSI: WHY VENUS MADE OUT WITH THEMBA

Venus is playing games with Themba and played with B.U. because she doesn’t love him as much as he loves.

She came into the house to win the R2million rand and isn’t looking for love and doesn’t even want a relationship.

She revealed her true intentions to Themba this weekend after she made out with him.

Venus wasn’t able to share her feelings with B.U. because he’s serious about her and she didn’t want to break his heart.

Venus was ‘in a relationship with B.U.’ as part of her strategy to stay in the house longer and she made out with Themba because she’s still playing games.

Fans also saw a different side of Venus since B.U’s exit and realised that she seems to have more things in common with Themba than B.U.

ALSO READ:#BBMzansi 2022: Yoli, Vyno and Norman got evicted from the house

This also reveals that B.U. was heartbroken when he watched her and Themba together on Saturday.

The star revealed in an interview with Drum Magazine that he connected with Venus so well that he sees a potential relationship outside the reality TV show.

“Venus is my ride or die. Her weirdness complimented mine.”

He prepared Venus for a potential exit before he exited the show on last Sunday (20 February).

“I don’t think she was surprised; we had spoken about it.”

“I pulled her to the side, we had our little moment.”

“We were both hoping it would not happen but when it did, it was emotional.”

He also tells the publication that he didn’t see himself meeting a person like her as he was going into the game for the money and didn’t plan to build something special with anyone.