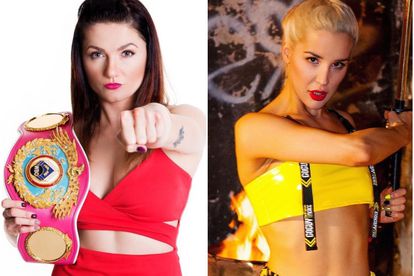 An MMA or boxing pre-fight usually involves a lot of trash talking, intimidation and plenty of cold, hard stares, often referred to as a “stare down”…

But a sex toy? This has to be the first!

A female Polish boxer has gone viral after she shoved a sex toy in her opponent’s face during their pre-fight stand-off.

What followed was nothing short of wild!

Also read: Toy Story: Woman tells all about how orgasms helped her heal

Lil Masti reacts in pure rage and throws it back at Ewa who responds with a slap to the face. The pair come to blows before they are separated by security. They then take turns to angrily insult each other via the mediator’s microphone .

But the standoff leads to another actual fight, with both women kicking and punching each other in the process.

Despite the drama, Lil Masti – who is also a musician – had the last laugh by winning the match, defeating Ewa in a total knock out in Round 3.

She took to Instagram to gloat alongside a picture of her kissing the gold trophy: “I defeated a professional boxer world champion. It still hasn’t come to me … Thank you for your support. I thank those who believed in me. Love you”.

Ewa, on the other hand, accepts defeat with her tail between her legs.

THE BOXER WITH A BIZARRE FETISH

It’s not the first time Ewa Brodnicka has pulled off a bizarre publicity stunt ahead of a fight. The 37-year-old featherweight once kissed her opponents lips during a face-off!

Edith Soledad Matthysse was left completely dumbstruck after being given a cheeky peck ahead of her WBO world title fight with Ewa in 2019.

The goodbye kiss seemed to have done the trick with Ewa winning the match and retaining her title.