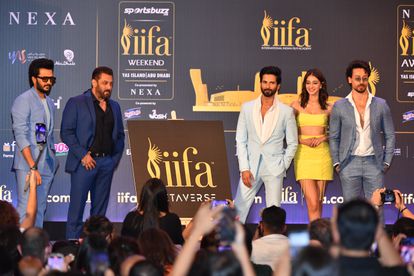 Bollywood’s brightest stars will gather in Abu Dhabi on Saturday as the Indian Oscars return for the first time since the pandemic shuttered cinemas and turned audiences on to streaming.

Host Salman Khan and actor Aishwarya Rai Bachchan will be among the A-listers at the International Indian Film Academy Awards celebrating the Hindi-language movie industry, the world’s most prolific.

The glitzy show follows a box office slump when movie-mad India was hit hard by Covid-19, with US streaming giants such as Netflix and Amazon Prime Video rushing to fill the gap.

“I’m excited to perform at Abu Dhabi before a live audience. I’m sure it’ll be a fun show,”

said actor Shahid Kapoor, who will dance at the first IIFA awards since 2019.

“I’m very nervous but I hope I can do my best,”

“Shershaah”, the biopic of a war hero killed in the 1999 Kargil conflict with Pakistan, leads the way with 12 nods, with “83” — the story of India’s 1983 cricket World Cup victory — nominated for nine awards.

Real-life intrigue is not far away. One performer will be actor Rhea Chakraborty, who was arrested on drug charges in 2020 after her boyfriend, actor Sushant Singh Rajput, allegedly committed suicide.

Chakraborty needed clearance to travel to Abu Dhabi and is under conditions set by a Mumbai court including attending the Indian embassy every day.

The show is also taking place as police probe the death of renowned Bollywood singer Krishnakumar Kunnath, or “KK”, who died after a concert in Kolkata of a suspected heart attack this week. Media reports said there were injuries to his face and head.

ALSO READ: Fear and hope under fire in Ukrainian village near Russian border

Pumping music and scantily clad performers will be a change of scene for Abu Dhabi, the United Arab Emirates’ oil-rich capital which has been upgrading its staid image with imported attractions including Formula One.

The awards have been held at venues around the world including London, Madrid, Johannesburg and Singapore, reflecting Bollywood’s wide appeal and the sprawling Indian diaspora.

The Hindi-language film industry was worth $2.5 billion (about R38.9 billion) in 2019 and produces more movies than any other. India also releases hundreds of films in its 21 other official languages every year.

But pandemic lockdowns sent the industry into a tailspin, with multiplex chains suffering major losses and dozens of small cinemas going bust.

In a country where cinema visits are central to cultural life, India’s media and entertainment earnings slumped by a quarter to $18.7 billion (about R291 billion) in 2020, according to accounting firm EY.

The theatre closures prompted a surge in subscriptions to streaming platforms with American services Netflix, Prime and Disney’s Hotstar tapping into a sharp growth in online audiences.

Some big-budget Indian films were released straight onto streaming platforms, such as comedy-drama “Gulabo Sitabo” starring Bollywood great Amitabh Bachchan, which went out on Amazon in May 2020.

However, cinemas have made a robust recovery since restrictions were eased, with non-Hindi movies like “Pushpa”, “KGF” and “RRR” from southern India making brisk business.