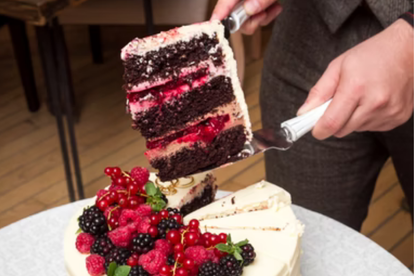 Weddings can bring out the best and the worst in people – in the case of one couple it can arguably be considered the worst. According to an online post, the bride not only charged each of their guests for a slice of cake but also charged one dude an extra amount after he was caught on CCTV helping himself to another piece.

One man could not believe his eyes when he was texted by the bride of the wedding he recently attended asking him to pay up for “stealing” an extra slice of cake at the special event. Taking to Reddit, the man shared how all of the guests were charged $3.66 for a slice of cake – something he initially thought was a joke.

“I paid for the first slice after it was announced on the day we’d be helping to pay for their cake! It was quite a talking point at the wedding as the best man first announced it and then it was confirmed in the groom’s speech too.

“Thought it was a joke but then when people were queuing for the cake people had to go back to their tables to get cash.”

After paying for his first slice, he obviously thought he was free to help himself to another but after getting texted by the bride asking him to pay for the other slice, he realised his mistake.

“Hey so we were just looking at the CCTV and saw that you had two pieces of the wedding cake,” the text read.

“We announced that each guest must pay per slice and noticed that you only paid for the one. Can you please send the £3.66 ($A6.80) ASAP.

The bride and groom were soon getting bashed all over the place for making their guests pay for a slice of cake. Many of them called the couple “cheap”.

“Paying per slice is tacky as well, but sending actual video feed is a whole other level of crazy! That’s what has me the most gobsmacked!” wrote one Reddit user.

ALSO READ: Didn’t RSVP? This bride may put you at the ‘shame table’…