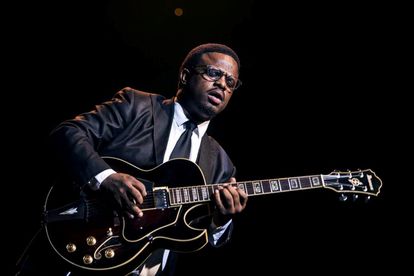 In 1997, Monama was drawn to a guitar that belonged to a neighbour. Largely self-taught, he immediately showed signs of natural talent on the guitar. His interests, however, were broader than music. After high school, he moved to Pretoria and enrolled for political science studies.

But the musical calling proved much stronger, and so he moved to Johannesburg and impulsively enrolled at a music institution. This came about after he heard about the school from a musician who had convinced him he should be studying music.

At the Central Johannesburg College, Monama learnt more about music harmony, performance and leading an ensemble. During this period of self-discovery, he found other voices within the jazz idiom. He speaks fondly of musicians like Wes Montgomery, Tal Farlow, Charlie Parker, Thelonius Monk and Ella Fitzgerald.

Monama has developed a great sense of melody by composing catchy tunes without compromising on depth. He admits to also being influenced by non-musical surroundings which then inform his music.

Monama may have strong jazz influences, but is pushing boundaries all the time by incorporating many different musical cultures. To label him a jazz musician would be to limit his work.

He sees himself as part of the new generation of South African musicians who want to take music of the African continent to greater heights. These are musicians who have a strong understanding of the local sound, but have global aspirations.

He has performed with piano greats like Themba Mkhize, Abdullah Ibrahim and Andile Yenana. He worked with the late Sibongile Khumalo and is lead guitarist in Sipho “Hotstix” Mabuse’s band.

Monama’s debut album is titled Rebounce and speaks to milestones in his life. The guitar maestro also conceived and founded the Grazroots Project. Through it he has set out to re-connect South Africans with their musical heritage to “give birth to a new soundtrack that will carry us into the future as a nation”.

As a result of the coronavirus pandemic, he began taking tutorials online, where they are available for students to watch and learn from.

The South African catches up with Billy Monama

A new decade mean a new, progressive sound; an evolution of sound and style. Musical styles typically have a lifespan of a decade before a new sound emerges. However, there will always be purist musicians who will have a place in the new decade, though their soul remains in the past.

It is the being recognised and celebrated by the public. For me it is about having an influential voice that speaks positively to the masses and brings change in society, especially in black and other disadvantaged societies. It is hard to be at the top.

Fame is not always sustainable and can be short-lived, because there will always another rising star. When people are at the top, they should remain humble, grounded, respectful and never lose their humility.

I don’t think there will be ever a retirement for me. Music is a lifetime calling and business. Musicians make music with emotions, not with instruments. The instrument is a tool to capture and execute the emotions. So, as long as we are alive, there will never be retirement.

It is something beyond lyrics and all the words one can string together. Music has always been there for me — I don’t even want to imagine life without it.

Music is a powerful tool to express feelings, life experiences and emotions. It helps to convey spiritual connection, cultural diversity and [is a link to the] ancestors. It is a universal language: There wouldn’t be a dance without music.

It is an offering that plays like my autobiography. It revisits the old South African classics, and celebrates past South African composers and musicians.

It tells of various landmarks in my life. It is the soundtrack that underscores the sentiments of places, people, experiences and influences that have shaped my life and music.

I strongly believe that, to have a clearer perception of the present, in our pursuit of the  future, it is imperative we meaningfully reflect on the past. We are surrounded by mirrors reflecting where we come from and where the roots of our identity lie.

Check out Monama’s trailer on Kwela:

Tell us about your debut album, ‘Rebounce’?

Rebounce attempts to echo the voices of  the masters  and pay tribute to those whose ingredients have added flavour to Billy Monama’s developing artistry.

It is a collection of my original works composed over an extended period of trying times, while working hard to establish myself in a new city and in a new artistic space. It’s also a fresh take on some South African folk songs that serve as a link between the past and present into our future.

Pat Metheny. I love his compositional technique. Here at home, I would love to write with Themba Mkhize. He has a fine ear and experience of African harmonies.

It is to perform on stage for the full-house audience. I also enjoy doing research and writing stories about South African music.

See you Later — when I play this song, people they automatically stand and dance.

No funny moments, but FUN moments. We have fun on stage — we get to forget many things, such as about our socio-economic problems.

George Benson. Besides being a soulful virtuoso guitarist and vocalist, he managed to cross styles of music and evolved with them over over decades. He comes from playing swing to pop music. He has the art of performing for people and he knows what his audience wants.

Watch his trailer for the African Jazz tutorial (Vol 1) here:

I can have many rounds when drinking, so many rounds that I can lose count. And I never count: I drink socially, with good company and music.

My personality and experience, and being a versatile musician who plays western and South African styles without compromise.

If you were not a musician, what would you do?

I’d be a political analyst.

Favourite albums of all time?

I don’t know where to begin. Many songs took me through different journeys of life. What is currently on repeat on my playlist is I Remember Billy, by Chris McGregor.

I love humans. I have a special love for older musicians — they are the grassroots. And must say that I love my children more than anything.

What is your favourite word or phrase?

Give us some real proper slang and what it means

Matwetwe – the direct translation is wizard but in slang it means guru.

Publishing tutorial books of all instruments and producing a documentary about the stories of black South African music.

Happiness is everything, is good for the heart and soul. It includes the positive, pleasant emotions; joy and satisfaction. Happiness is also positive thinking — enjoying the little things, appreciating what you have and realising it is a choice you can make today.

Check if the guitar is still in tune and check the audiences’ reaction. Oh, and another is to check that my pants zip is done!

To respect the elders.

I don’t watch sports. I am not interested in any sports and am just not a sports person. I always see how people get worked up and my heart is too weak for that.

Yes, I do charity work. I don’t call it charity but pro-bono, by conducting music workshops at disadvantaged schools.

I wish South Africans were more patriotic. I must say my primary wish is to eradicate most of the western music curriculum in schools. This will also give ammunition to our composers to develop a writing “voice” that speaks to our history and heritage as we map out our identity as a nation.

This will contribute towards a broader awareness of our unique musical styles, which will hopefully lead to more musicians exploring that sound, and more audiences demanding to hear our local sounds. We are documenting our own history for generations to come.

Watch Billy Monama and Themba Mokoena perform at House on the Hill: