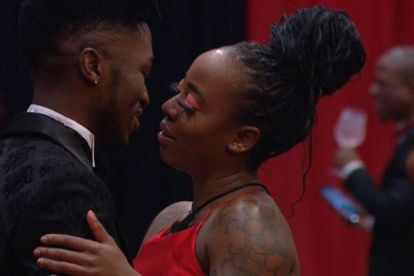 Viewers of #BBMzansi (Big Brother Mzansi) are curious about Vyno Miller and Terry’s relationship in the house.

The pair started dating in the house the moment Vyno joined the show and even revealed that they knew each other outside the house.

ALSO READ:#BBMzansi 2022: Acacia is the third housemate to be evicted

Vyno and Terry are in hot water with #BBMzansi (Big Brother Mzansi) viewers as they believe that they’re playing games with everyone in the house.

This comes after Vyno pursued Yoli last week and even asked her to be his girlfriend while he’s still in a relationship with Terry.

Fans now think that Vyno and Terry planned to date each other and date other people in the house to avoid being evicted.

#BBMzansi on Twitter also believes that Terry knew that Vyno was going to hit on Yoli last week because they planned it together.

Housemates are now discussing the incident after the host of the reality show asked Yoli about what Vyno said to her.

Fans are wondering why Terry wasn’t shocked when Lawrence Maleka (host of #BBMzansi) asked about Vyno and Yoli.

The couple were also spotted whispering about the whole thing and are now exposed.

“Terry and Vyno are playing the game. Terry just said that to Libo and now Vyno is saying this to Yoli? Lol.”

So they have become like Emma rose and plan for Vyno to flirt with the girls to avoid nominations.”

The aim is to play the game and the housemates, not the voters, that ain’t fair on him.”

“And I wonder who else is being depicted in a ‘one-sided’ way.”

“Do you blame us for getting in our feels after seeing the portrayal of the whole thing?”

“We were only given the idea that Vyno is playing both Terry and Yoli.”

“And that could affect how people vote for him.”

“We should’ve been shown his discussion with Terry so we have a full idea.”