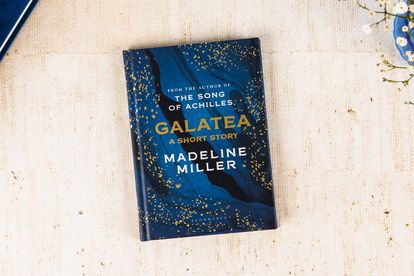 Galatea, a short story by acclaimed historical fiction author Madeline Miller, has been published in print this year. Taking a feminist approach, Miller retells an ancient myth from a woman’s perspective. The vibrant writing and sparse setting allow the heroine’s character to shine, making for a stimulating read.

The tale draws on a Greco-Roman myth: A sculptor falls in love with one of his creations and successfully begs the love goddess to bring her to life. Nothing else is told of this woman’s life in myth, but in Galatea the eponymous heroine narrates. Much like the goddess breathes life into Galatea, Miller brings depth to Galatea’s personality and story.

The story opens with Galatea held forcefully in a sickroom. No one believes that she was once made of stone and she is labelled mad. This allows the sculptor, now her husband, to exert full control over her life: he imprisons her outside the town and keeps her from her young daughter.

But Galatea dreams of freedom for both herself and her daughter. Drawing on her intimate knowledge of her nurses, the doctor and her husband, she hatches a cunning plan to escape once and for all.

Is ‘Galatea’ for you?

Make no mistake: Galatea is no fairytale. As she lies in her bed, Galatea reveals the extent of her husband’s violence (trigger warning: rape). Galatea draws attention to the disturbing truths that are present in so many of the Greek myths which, at first glance, seem so beautiful and tranquil.

Galatea herself is an engaging, vibrant character who you could easily follow through hundreds of pages of adventure. But Galatea is a short story; this is part of its delight. In under an hour, you can read the story and reflect. The plot itself is simple; the moral of the story needs some exploration from the reader.

The stunning fabric hardback cover must also get a shout-out. This, in addition to the nature of the short story, makes it a good gift for readers who are time-pressed or whose tastes you don’t know too well.

About the author: Madeline Miller

Madeline Miller is the award-winning author of No 1 New York times bestsellers The Song of Achilles and Circe. She has a BA and MA from Brown University in Latin and Ancient Greek, and has been teaching both for the past nine years. She has also studied at the Yale School of Drama, specialising in adapting classical tales to a modern audience.

Her debut novel, The Song of Achilles, was awarded the Orange Prize for Fiction in 2012 and has been translated into 25 languages

Miller lives in Philadelphia in the United States with her husband and two children. She’s active on social media where she shares posts about her books and her fluffy cat, Muffin.

Galatea is published by Bloomsbury Publishing. It retails for R185 at Exclusive Books.