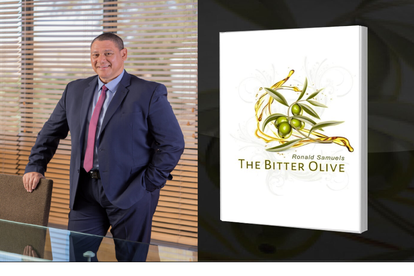 South African businessman, farmer and now author Ronald Samuels sat down for an exclusive interview with The South African to talk about his incredible life as told in his memoir, The Bitter Olive.

The Bitter Olive has sent shockwaves throughout the country as Samuels shared his story of being torn away from his adopted family at the age of nine because he was not white. Samuels invites readers into his tragic childhood, his challenging teenage years in apartheid South Africa, and shares what life lessons he has learnt along the way.

Using the olive tree as an example, with fruit that starts out as too bitter to eat, Ronald recounts how he made the choice to never let bitterness ruin his life.

ADOPTED DURING APARTHEID: FROM PRETORIA TO CAPE FLATS

A week after his birth in 1969, young Ronald was adopted by a white family in Pretoria. Despite his curly, black hair and darker skin than his siblings, his family never treated him differently.

He lived happily with this family until the clouds of apartheid that had been gathering, cast a shadow over their lives. Convinced by the church and others who told them that it would be better for nine-year-old Ronald to grow up in a coloured family, his parents made a truly heartbreaking decision.

They sent Samuels from his idyllic and familiar home in Pretoria to the Cape Flats, believing that this was what was best for him.

Confused, lonely and utterly displaced, the author grew up in the dangerous climate of apartheid South Africa in the Cape Flats. Years later, he eventually reconnected with his adopted family back in Pretoria and he was told that he was never sent away because they didn’t want him.

After years of doubt, fear and deep sadness, Samuels finally understood exactly why he was sent away in the first place. However, he still had a nagging question of who and what he really was?

But how could this be? After years of questioning, Samuels found out that both his biological parents were white, but he, their son, simply looked coloured. The colour of his skin and the racist government of the time meant that the young Ronald was denied a normal childhood.

But The Bitter Olive is not a tale of woe. Even though it was written by someone who has had to endure more sadness in his life than most, his memoir is a celebration of life. His life story is not recounted with bitterness, but with humility and love.

RONALD SAMUELS: ‘I NEVER WANTED BITTERNESS AND HATE TO WIN’

Samuels never let his past dictate his future. He made his own path, and he has built a wonderful life filled with love and hope. His is truly a remarkable story.

He doesn’t deny that his life has been difficult.

“You don’t get through what I got through without scars. I went to hell and back”.

He never allowed anger and bitterness to rule his life, striving to be thankful under all circumstances, no matter how difficult.

Samuels is very passionate about sharing his story and encouraging others who have endured difficult times. He is also a firm believer in not holding on to the past and letting it control your present.

Samuels has always been outspoken about his beliefs. Even though he is someone who has had a life deeply affected by racist ideologies, he still maintains that his generation hasn’t done enough for the current one. He hopes that The Bitter Olive will start uniting our broken nation.

He says that South Africa today is too filled with hate from the past. Samuels believes that young South Africans are fighting their parents’ and grandparents’ battles and not their own.

“You are fighting for their past and not for your future”.

When asked what he wants young South Africans to know, he had the following to say:

Our diversity is what is ripping us apart, when it should be the thing that unites us. We have to embrace out diversity. Be glad the person next to you is different to you. Leave your parents’ baggage behind.

AUTHORS ON AUTHORS: WHAT SAMUELS HAS ON HIS BOOKSHELF

When he is not farming or travelling for business, Samuels loves to relax around a good braai.

“I don’t have that much time for reading but when I do read, I like self-help and leadership books. John Maxwell is a favourite”.

His idols include Nelson Mandela, his teachers at school, and the people of South Africa.

‘THE BITTER OLIVE’ – WHAT TO EXPECT

Filled with history, poems and true heart, The Bitter Olive is not one to miss. As a lover of history and a believer in the power of knowing your history, Samuels has taken great pain in including South African history within his own story. The Bitter Olive is not some boring history book, however. It reads easily and Ronald’s writing voice makes it seem like he is talking to a friend.

The Bitter Olive is published by Ssali Publishing House and is available for purchase at Amazon.