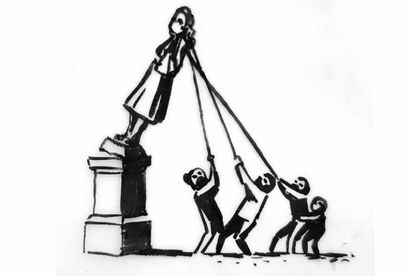 Even in lockdown, Banksy is toppling social conventions. The anonymous British graffiti artist is creating awareness on #BlackLivesMatter using his 9.5 million followers on Instagram.

Banksy, known worldwide for his sociopolitical street art, has posted a drawing of protesters pulling down the statue of British slave trader, Edward Colson.

His drawing refers to the event on June 7 when more than 10 0000 #BLM protesters tore down the bronze statue of the slaver and threw it into the River Avon.

The statue of 17th Century figure had stood in Bristol’s city centre since 1895. In his time Colson also was regarded as a philanthropist, donating money to charitable causes which supported those who shared his political and religious views.

However, after the death of African-American George Floyd at the hands of white police officers in the US in May, protests have been increasing. Various groups are putting monuments in the US and elsewhere under scrutiny with petitions to remove controversial figures such as Colson.

Banksy’s idea for the statue

Banksy took to Instagram with his illustrated proposal for a new statue. Banksy explained it “caters to those who miss the statue and others who don’t”.

“What should we do with the empty plinth in the middle of Bristol? Here’s an idea that caters for both those who miss the Colston statue and those who don’t,” Banksy posted.

“We drag him out the water, put him back on the plinth, tie cable round his neck and commission some life size bronze statues of protestors in the act of pulling him down. Everyone happy. A famous day commemorated.”

Banksy has spoken out on the Black Lives Matter movement before on his Instagram profile.

Earlier this month he posted a detail of a framed portrait of a black figure next to a memorial of flowers and a candle. The full image shows how the candle is burning into an American flag hanging over the portrait.

He commented: “People of colour are being failed by the system. The white system. Like a broken pipe flooding the apartment of the people living downstairs. This is a white problem. And if white people don’t fix it, someone will have to come upstairs and kick the door in.”

Banksy is famous for resistance art and destroying tradition which is clear in the way he has been challenging the art canon for more than 20 years.

A woman who paid more than a million pounds for the famous Banksy piece, Girl With Balloon, was in for one of the art shocks of the century.  Moments after Sotheby’s in London sold the framed Girl With Balloon in 2018, the canvas shredded itself.

Now using his social media platform to raise awareness on social issues among his 9.5 million subscribers, he seems to be tuned into the spirit of the times once again.