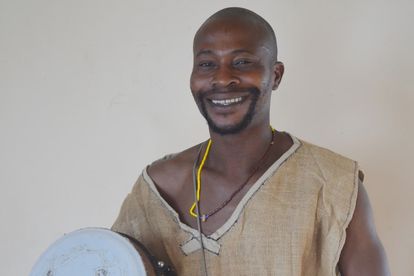 Many people know him as the brilliant character who played Marema in the well-known SABC Phalaphala FM soapie called I khou khidzhana. He is currently portraying the old man Vho-Murunzi in another soapie Ndi yone mini yeneyi on the same radio station. But behind all these, Mashudu Thomas Romani is one of the people who has the rare skills and commitment to preserve Venda indigenous music, instruments and culture.

Who is Romani the musician?

A poet in his own right, Romani, who hails from Matanda village in the Nzhelele area outside Thohoyandou, Limpopo, plays rare indigenous music instruments which include lugube, nguluvhe, mbila and mirumba.

Romani says he fell in love with indigenous music in 2005.

“I was walking in my village when I picked up a lugube. I developed an interest of playing it but there was no one to teach me how to play. I had no other alternative but to teach myself the skills of playing lugube. As years went by, I fell in love with other indigenous instruments like nguluvhe, mbila and mirumba. I then taught myself how to play these instruments. Since then, these indigenous music instruments have been part of my life every day.”

He says he is on a drive to teach young kids how to play these instruments.

“There is a great possibility that these instruments can vanish if we do not transfer the skills to the young ones. At times, I go the various villages, conduct workshops and teach children how to play these instruments. I’m happy that there are young kids I’m mentoring who are deeply in love with indigenous music.”

His talent has not gone unnoticed as he has earned several awards in the previous years.

“I have been featured playing indigenous music instruments by musical groups like the Vhembe Heritage. I have also individually performed in social gatherings, government functions, at Mapungubwe Heritage Site and at Musina Annual Show. I have also been featured on Phalaphala FM and SABC 1 television programme, Shift, while playing indigenous music instruments. I’m happy that wherever I go, people like my music and poetry and they cry for more.”

Romani has taken his music career on another level by releasing his debut indigenous music album titled Tsimu yanga.

“As a start, I only recorded three songs in the album. The songs include Vho Tshinyala, Musina Wanga and Tsimu yanga. People like my music and they are buying this album daily. This has motivated me to plan for a ten-track album to be released next year.”