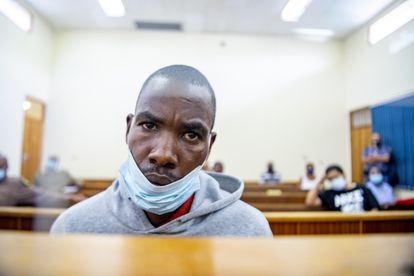 Siyamcela Sobambela, known as the Breede Valley or Wolseley serial killer, was sentenced to an effective 25 years imprisonment for the 2020 murders of Miche Pienaar, Gizella Minnaar and Bernadine Frans.

Sobambela, 35, killed Pienaar and Minaar in September 2020 and Frans in October. All three of the victims visited his caravan, which was parked near the Pinevalley Informal Settlement in Wolseley.

He buried the first two victims in shallow graves about 200 metres from his caravan after smothering them.

He smothered Frans and was spotted by a neighbour as he was about to dump her body. When he was questioned he left her body at the side of the road, returned to his caravan and waited for the police to arrive. He was arrested in October 2020.

“Judge Lister Nuku, described Sobambela as a danger to society and that the court is obliged to sentence him to long-term imprisonment. He said the families of the deceased were still at a loss as to why he killed the deceased,” said NPA spokesperson Eric Ntabazalila.

Ntabazalila said the NPA accepts the decision of the Western Cape High Court, which sat at the Worcester Magistrate’s Court.

WOMEN KILLED AFTER THEY VISITED CARAVAN FOR HELP

According to the State, Sobambela’s killing spree began in early September 2020. He arrived home at approximately 16:00 and saw that his caravan was unlocked.

When he went inside he saw a bag with clothes that he recognised as belonging to Miche Pienaar. He left his home to look for her and when he found her he told her to take her things and leave.

Pienaar told the accused that she had got into an argument with her boyfriend and had nowhere else to stay on that evening. Sobambela insisted that she leave and she did.

She returned to the caravan at 21:00 and woke the accused by knocking at his window. Sobambela opened the door and Pienaar entered and insisted on staying for the night.

Sobambela said no again. The State says he tried to push her out of the house but she would not budge.

The deceased then swore at the accused and he responded by slapping her. She retaliated. They began fighting, which is when Sobambela took the blanket from his bed and wrapped it around Pienaar’s head and sat on her until she stopped moving.

When he removed the blanket he saw that she was dead and decided to bury her near his caravan, at the same spot where the community goes to chop trees for wood.

At the end of September, he killed Gizella Minaar. Sobambela said the deceased visited his caravan on a Friday evening and he told her to leave because he wanted to wash. She did not return.

According to the State, two coloured men visited the caravan at 22:00 on the day and said they were looking for Minaar. When Sobambela told the men she had left and did not return they did not believe him. They beat him up and threatened him with an Okapi before searching the caravan and allegedly stealing the accused’s cellphone and R380.

Angry, Sobambela immediately went to search for Minaar because he wanted his belongings back. He found her and brought her back to the caravan. When the deceased denied knowing the men and told him she could not get his stuff back, he strangled her to death. He later buried her at the same spot as Pienaar.

According to the State, Bernadine Frans visited Sobambela’s caravan on 23 October 2020 and asked for R40 just as he was leaving. He told her to stay at the caravan as he was going to return soon.

“The accused had left a R1000 in his wallet under his pillow on his bed. When he returned the deceased, the money and some of his clothes were gone,” said the State.

Frans reportedly returned to the caravan the next day and an incensed Sobambela convinced her to come inside. He confronted her about the money and she told him she no longer had it. He responded by hitting and kicking her repeatedly.

The State said Frans drew an Okapi knife and tried to defend herself but Sobambela overpowered her and suffocated her with a duvet. He sat on her until she stopped moving.

He left the deceased’s body in his caravan and returned later that evening to dump her body. As he was carrying the body one of his neighbours saw what he was doing and questioned him. He did not answer and decided to leave Frans’ body at the side of the road.

Sobambela returned to his caravan and realised the police would be summoned. He was arrested.

A passer-by discovered the shallow graves that contained the bodies of Pienaar and Minaar the day after his arrest.

He pleaded guilty to the murders after confessing to the police in 2020.