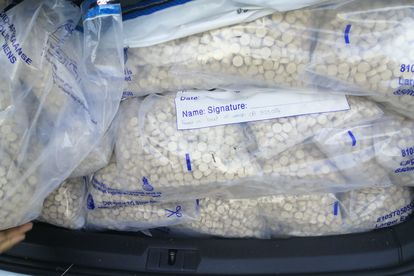 82 000 mandrax tablets were found in the boot of a suspect’s vehicle on 17 March. Photo: Supplied.

82 000 mandrax tablets were found in the boot of a suspect’s vehicle on 17 March. Photo: Supplied.

A 36-year-old suspect is expected to face drug-related charges in the Wynberg Magistrate’s Court on Tuesday, 22 March. He was arrested following a high-speed chase with the police on 17 March.

When the cops tried to pull the suspect over on Thursday, he reportedly sped off and a chase ensued. It came to an end in the Tokai area of Cape Town after the suspect’s vehicle crashed into another.

“The vehicle was then searched and approximately 82 000 mandrax tablets were found in the boot of the vehicle with an estimated street value of more than R3.2 million,” said Hani.

The suspect will face charges of dealing in drugs next week.