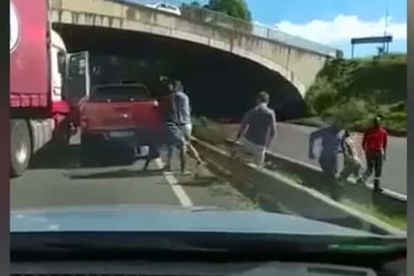 Another incident of road rage has gone crazy-viral and this time things got serious after one of the parties pulled a gun on the other.

TimesLive reports that the gun fired by accident in the altercation between the Truck driver and driver of the Ford Ranger.

Speaking to the newspaper, Andreas Mathios of Blue Security – the first respondents to the incident – said the truck driver moved into the fast lane after realising that his vehicle wouldn’t fit under the bridge ahead, the fast lane had a higher clearance level.

In doing so, however, the truck driver cut off the Ford Ranger. Both stopped and that’s when things got hairy.

“One of the drivers allegedly drew a firearm and a scuffle ensued. A shot went off and the firearm owner was injured on the hand. He was taken to hospital for medical attention,” KZN SAPS spokesperson Captain Nqobile Gwala told TimesLive.

“Hillcrest police have opened a case of attempted murder and pointing of a firearm for investigation. No arrest has been made‚” she said.

Soon after a shot went off and we now know the gun fired accidentally and injured the Ford driver’s hand.

Folks, you never know what the person in the other car has stashed away. Rather report incidents to the police instead of taking matters into your own hands. In this case, someone could have been killed, best be on the safe side.