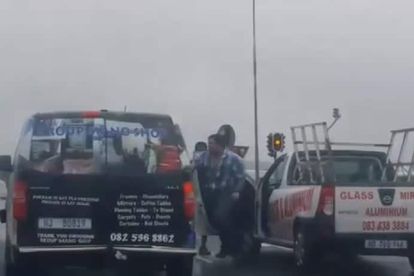 Video footage has emerged of a Durban road rage incident that took place last week. KZN resident Christelle Barnes took to Facebook to ask for information after a van (as seen in the video) drove into her husband.

“My husband was involved in a car accident at Mid day today…just before the Queen Nandi drive turn off on the N2 freeway, heading South. It was a Black panel van with logo “Group Mano shop” that pushed him off the road and also drove into the back of another vehicle, he fled the scene and my husband chased after him and blocked him off to get his details. He was then brutally attacked by this driver of the panel van and he used a wheel spanner. There was another white vehicle involved and the lady was taken to hospital.”

SAPeople then reached out to Christelle who revealed that she has received the details of the man in the panel van.

“When he was contacted by several people, he said my husband attacked him first.”  “However a kind gentleman took a video proving this is not true.”

Check out the video for yourself below.