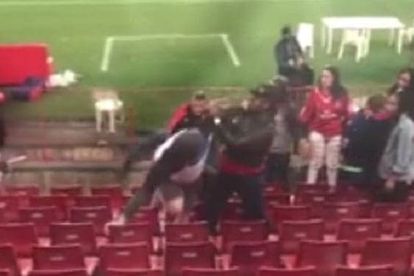 There were ugly scenes at Ellis Park over the weekend after the Sharks’ win over the Golden Lions, as a fracas was caused by the alleged actions of one pathetic man.

When fans left the stadium following the full-time whistle, a white male was said to have inappropriately touched a black woman. When she confronted him about it, his response – according to another spectator – was shocking:

Sijadu Mzozoyana told Times Live that the accused shouted to the woman “Shut the f*** up, you black k*****”.

Naturally, Sijadu was enraged and wanted to give the racist a piece of his mind, but the scrum that ensued after the comments was too crowded. Mr Mzozoyana went on to give context to the ruckus:

“There was an altercation between a white man and a black woman. This gentleman physically grabbed the black lady’s bum. She was upset about it and she slapped him across the face and started screaming at him‚”

“He said it more than once. I then walked towards him and asked who is this k***** he was referring to. Before I could get to him‚ a group of white guys came up and stopped me. I didn’t want to throw punches. I wanted to speak to him.”

You can watch the melee that the man’s behaviour caused here. If you’ve got a strong opinion you’d like to share with us here, please make yourself heard in our Facebook comments.