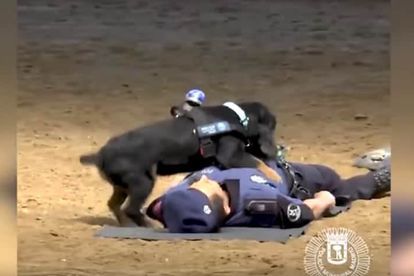 A police dog performing CPR to save his handler’s life is probably one of the best things you’ll see today. It seems the clip was taken during a police dog demonstration and went crazy viral since it was uploaded.

The talented dog named Poncho is the star of a recent video shared by the Municipal Police of Madrid in Spain.

According to reports, the dog is seen simulating cardiac arrest during a training exhibition, prompting the sweet pup to show off how he’s been taught to “resuscitate” his handler who is seen ‘playing dead’.

Also read: How to play rugby according to ‘How to Dad’ and Kieran Read

He even appears to stop to listen for breath and feel for a pulse in the video that’s racked up more than two million views and re-tweeted thousands of times. The video has 2 million views on Twitter alone.

Watch Poncho resuscitate his handler in this adorable video:

How adorable! Comments on The Police Department of Madrid’s Instagram account range from “cute” to “this is a very important video!”

“I can’t even…” said one Instagram user. “This is amazing,” said another.

Poncho the police dog is a hero for the internet. In a practice demonstration, Poncho's officer falls down, giving the trained pup an opportunity to spring into action.
FULL VIDEO: https://t.co/uBJj7W5Cwc pic.twitter.com/SuaH4w0bx2

He is a hero for the internet, yes!

I agree. These days, more than ever before, the best people on social media and often in life are animals who give us so much and want so very little in return.

Also read: Creepy footage of a robot dog opening the door for its “friend”