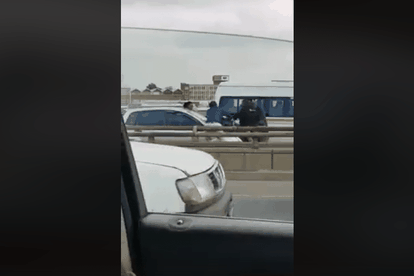 There’s something about rush hour traffic that just brings out the very worst in people. This road rage footage from Intelligence Bureau shows our highways are no place for cool heads.

A brazen beating occurred on the M2 in Johannesburg this week, in the middle of packed traffic during broad daylight.

What happened in the Joburg road rage incident?

The 40-second clip shows cars on the opposite carriageway crawling along at a snail’s pace. They approach two stationary vehicles on the other side of the road. But this is far from being a routine stop.

An unidentified man is pinned to the bonnet of what seems to be his car. With four people surrounding him, he’s unable to launch any sort of meaningful defence.

The helpless driver is then dragged to the floor and kicked before the group disperses after intervention from another passerby.

There is something rather unsettling about this video. We’re not quite sure what it is though. There isn’t a great deal of clarity regarding what lead to this situation, so it’s difficult to understand what threw these people into their rage.

The music in the background certainly does nothing to settle viewers. There’s something utterly daunting about watching a road rage attack take place whilst soft reggae plays away in the background.

South Africa is no stranger to these types of incidents. We’ve covered plenty of boiling frustrations on our roads, as viral footage of drivers clashing with each other goes viral in double-quick time.

This incident in Johannesburg has already been viewed 90,000 times. It’s prompted quite a stir on social media, as Facebook users all ask the same question: What on earth were these guys thinking?