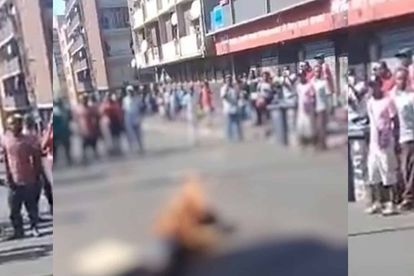 The video below contains very graphic visuals. Sensitive viewers are strongly advised against watching it.

The burned remains of the man you will see in this video were collected by forensic pathology services (FPS) after he was allegedly set alight by the community.

The incident took place in Hillbrow, Johannesburg, according to reports by @crimeairnetwork, a vigilante service agency that is well-renowned for posting about current affairs in South Africa, specifically crime.

In the video, the man can be seen battling to remain conscious as he burns alive. He stumbles a few times and nobody in the video cared to move a muscle and come to the man’s aid, feeding into the notion that they may have set him alight.

At some point in the video, a member of the community could be seen throwing a cardboard box against the burning man. Cardboard is an accelerant of fire. If that was an effort to help the man then it was lazy, to say the least.

Scores of people simply stood there, bordering the man in a semi-circle as he burned to the ground.

Hillbrow community takes the law into their own hands

According to the vigilante service agency, the man was accused of allegedly stabbing an unknown victim. The community’s response to that was to allegedly drench the man in paraffin and light the switch.

Read – The case of Zinhle Maditla: Mother accused of poisoning her four children

Something of this nature is absolutely difficult to watch. It says a lot about the gravity of violence we face on a daily basis. Nowhere were the police seen in the video.

We contacted the Hillbrow police station and they claim they have not received any information about a man that burned to death.

Please be highly advised that the video you are about to watch contains very disturbing, graphic footage. Viewers’ discretion is strongly advised.

DO NOT VIEW VIDEO IF YOU CANNOT DEAL WITH REALITY!!!!

HE ALLEGEDLY STABBED SOMEONE SO COMMUNITY TORCHED HIM. HILLBROW. JHB. GP. YESTERDAY. pic.twitter.com/wJN5yg8QpY

WHO says MORE monkeypox-related deaths can be expected

FF Plus FUMING over apartheid poster, says it ‘incites violence’